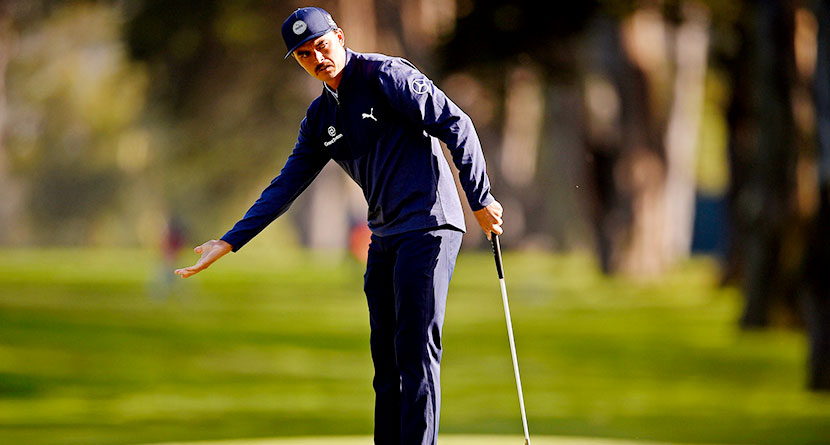 The knock on Rickie Fowler over the course of his successful and prosperous career is that while he may be eminently marketable and as good of a guy as you’d hope to come across, he hasn’t been able to get across the line in a big tournament.

That trend continued this past weekend at Harding Park, site of the 102nd PGA Championship, but it came to an abrupt end in one of the most unimaginable ways possible.

A sloppy 3-over par first round left Fowler on the wrong side of the cutline, but a sparkling bogey-free start to his second round not only had him inside the cut line, but also on the periphery of contention as players formed a logjam near the top of the leaderboard, not getting too far out ahead of those simply trying to make the weekend.

Fowler played his first 14 holes in 4-under par to reach 1-under for the tournament with a cutline that would eventually fall at 1-over par.

That all went sideways for Fowler on the par-4 6th hole, his 15th of the day. A wayward drive sent the 5-time PGA Tour winner scrambling, leaving him with a 9-footer for par. When the putt lipped out and rolled a few inches by the hole, the unthinkable happened.

Fowler approached his tap in, chatting with his caddie still in disbelief that the putt missed, and nonchalantly whiffed the 6-inch putt.

“Hold on a sec, just what happened there?!” an ESPN commentator said. “Did he whiff?”

Indeed he did. Fowler’s putter appears to dig into the ground and pop up, perhaps slightly moving the ball, but there was no doubt that it was an intended stroke. Fowler made no fuss about it, turning what would have been his first bogey of the day into a double bogey, and taking him from 1-under par to 1-over in an instant.

The cushion that Fowler had made for himself all of the sudden was gone and he still had two of the hardest holes on the course ahead of him — the 251-yard par-3 eighth and the 515-yard par-4 9th.

Fowler parred the 7th hole, but dropped another shot at the difficult par-3 8th. Needing a birdie on the par-4 9th to play the weekend, Fowler was unable to hole a 30-footer, sending him packing for the weekend of the first major championship of the year.

The missed cut ends Fowler’s streak of 14 consecutive cuts made in a major. He sits at 83rd in the FedEx Cup standings, which is good enough to get him into the first leg of the Playoffs in two weeks at The Northern Trust, but outside the top-70 that advance to the BMW Championship the following week.