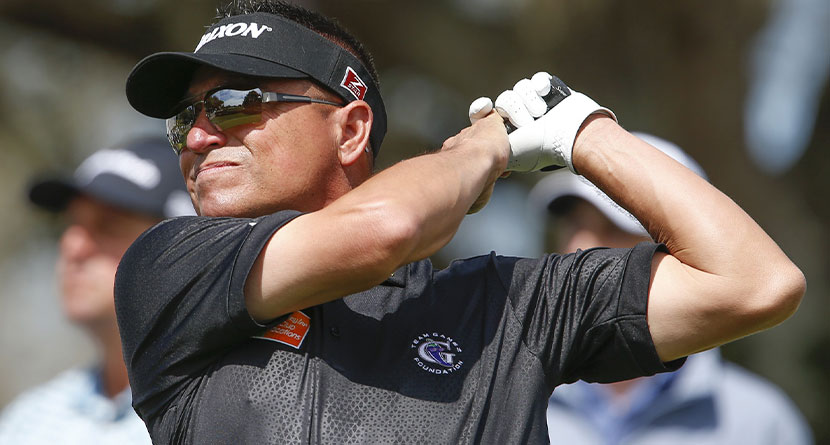 Robert Gamez had arguably the biggest highlight of his career at the Bay Hill Club & Lodge at the 1990 Nestle Invitational (now the Arnold Palmer Invitational).

Trailing major champions Greg Norman and Larry Mize by one shot on the 72nd hole, Gamez holed a 7-iron from 176 yards for his second career PGA Tour victory.

On Sunday, Gamez, 54, was involved in a less enjoyable incident in the Bay Hill neighborhood, as he was arrested on misdemeanor battery charges, according to a report from Golfweek.

The alleged incident took place late Saturday night at a residence in the neighborhood. According to online records, the charge is under battery statute 784.03(1)(A)(1), defined in Florida as: “Actually and intentionally touches or strikes another person against the will of the other.” No additional details are currently available on the incident. Gamez was released from Orange County Jail on Sunday.

Gamez was a three-time All-American at the University of Arizona and won the 1989 Haskins Award as the nation’s top collegiate golfer. He turned pro after his junior year and burst onto the PGA Tour scene with a win in his professional debut at the 1990 Northern Telecom Tucson Open.

That win, coupled with the hole-out victory at the Nestle Invitational, helped see him named PGA Tour Rookie of the Year that season.

After the strong rookie campaign, Gamez had to wait more than 15 years before lifting a winner’s trophy again, capturing the 2005 Valero Texas Open with a final-round 64 for a three-shot win over Olin Browne. The 15 years, 6 months between wins is the longest gap between victories in PGA Tour history.

Gamez most recently made headlines on the PGA Tour after shooting a 92 in the second round of the last year’s Arnold Palmer Invitational, then being disqualified for failing to sign his scorecard.

Robert Gamez shoot 92 Friday at Bay Hill and then is DQ’d for failing to sign his scorecard.

Gamez has failed to break 79 in 10 of his last 11 API rounds. pic.twitter.com/MPMpsKY1R5

The 2021 DQ was his last start on the PGA Tour. He became eligible for the PGA Tour Champions in 2018, but has only made 16 starts on the senior circuit.