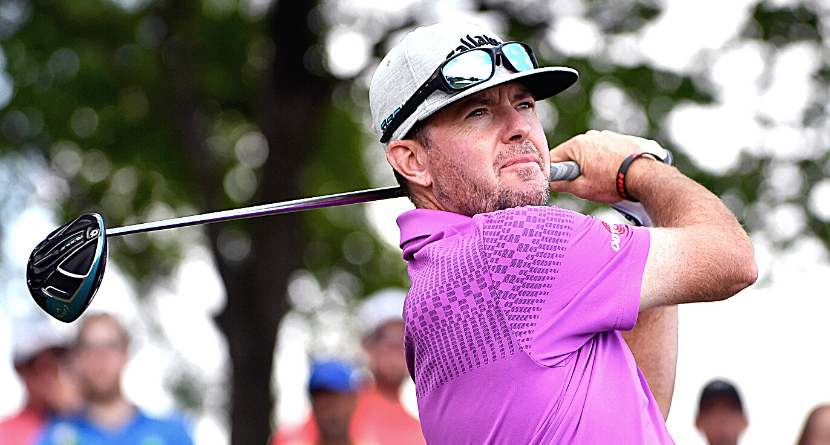 After months of speculation and debate, 44-year-old journeyman Robert Garrigus has become the first PGA Tour pro to file for a release that would permit him to play in the LIV Golf Series’ inaugural event in London on June 9, sources told Golfweek in a report published Tuesday.

Garrigus, who collected his lone victory in 2010 at the Children’s Miracle Network Classic, applied for a waiver ahead of the 45-day deadline by which players can seek permission to compete on alternate circuits whose events conflict with the Tour’s schedule. And while others are expected to follow suit, it remains unclear whether the Tour will stick by its original stance of banning players who attempt to defect to the startup league funded by Saudi Arabia and fronted by lightning-rod CEO Greg Norman.

It was Golfweek columnist and Golf Channel analyst Eamon Lynch — among the most connected insiders in the golf media landscape — who broke the news. And as Lynch notes, the countdown now begins on whether the Tour will honor the request by May 10 (30 days before the start of the LIV Golf Invitational).

The inherent moral conundrum of accepting “sportswashing” cash from a political regime with such a horrific track record on human rights has fueled months of heated discourse. But thus far it’s been much bigger names who bore the brunt of that criticism.

Garrigus fits the bill of a player who could earn life-changing money in a relatively short period of time. The LIV Golf events are expected to pay winners a $4 million share of $25 million purses.

In 2019, Garrigus was suspended by the Tour for violating its anti-doping policy. He claimed to have been prescribed medical marijuana by a doctor but couldn’t persuade the Tour to reduce or waive his punishment. Garrigus was open about how much the suspension hurt — both in terms of what missing 12 events cost him and the need to play without the aid of therapeutic drugs. So perhaps that explains his motivation for wanting to supplement his income on a rival tour.

“There’s something new that hurts every single day. Being a golfer for 25 years I guess that’s going to happen,” Garrigus said at the time. “But I could be on Oxycontin on the golf course and get a TUE (Therapeutic Use Exemption) for that. I think that is ridiculous. The Tour can talk to me all they want about it but that is a double standard. If you think I’m better on the golf course on Oxycontin than I am on THC, then you’ve lost your mind. It makes me laugh.”