Robert Garrigus “Shoots From The Hip” In Recent Interview 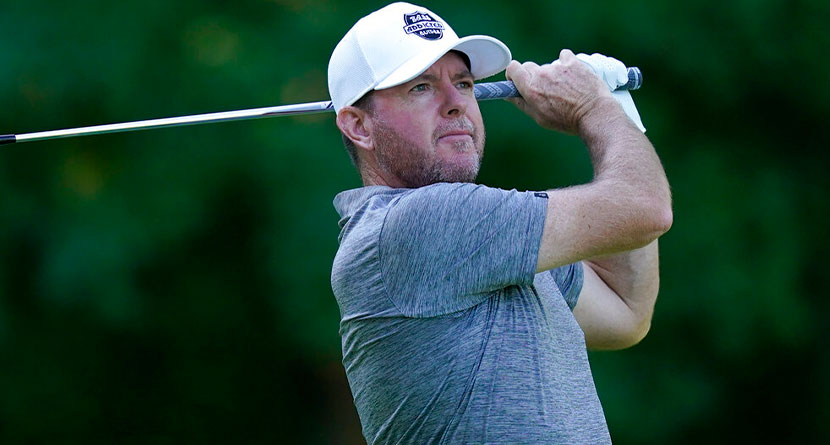 Robert Garrigus is the latest golfer to offer some very candid opinions on the state of the game and his fellow players.

The ongoing battle between LIV Golf and the PGA Tour has produced plenty of good quotes over the past six months, and Garrigus fired off quite a few headline-grabbing ones himself while on the FirePit Collective’s “The Grind” podcast last week.

Garrigus offered up his opinions on several topics, including the future of the DP World Tour, PGA Tour commissioner Jay Monahan, the LIV Golf circuit and even a fellow PGA player.

As The Grind host Ryan French said in his intro to the podcast, “Robert shoots from the hip; he does not hold back.”

My podcast with Robert Garrigus will be out tomorrow. And when I say he doesn’t hold back, I mean HE DOESN’T HOLD BACK.

As an example, his girlfriend DM’d and said “when he told me what he said about Billy Ho I almost had a heart attack”.

The interview opened with French asking Garrigus about LIV Golf and how much he pays attention to it. Garrigus said he doesn’t watch the LIV series, but he keeps up with the scores. He even had some thoughts on the strength of the LIV fields and what he thought he could have done if given the chance to compete.

“There’s a lot of guys on LIV that I would play for a million dollars a hole,” Garrigus said. “I look at the LIV stuff, I see the money they’re making, and I just giggle. There’s a lot of money being thrown around, ya know, and there’s some good play, no question.

“It’s obviously by the top players in the world that are playing, but the lower half, I mean, that’s why I wanted to play so bad; because I felt like I could kick some ass out there.”

Garrigus made headlines back in April when he became the first PGA Tour player to request a release from the Tour to play in the first LIV series event at the Centurion Club outside London. Like all other LIV-related release requests, Garrigus’s was denied, and he never played in a LIV event.

Despite Garrigus’s opinion that the back half of the LIV fields were so weak, he did say that he felt the LIV players should be receiving world rankings points. He also didn’t seem overly positive about it actually happening, due to the process currently in place, and the stakeholders who serve on the OWGR board.

In talking about the OWGR board, Garrigus said he believed the leaders of the different Tours were making the whole LIV fight about them, not the players.

“Unless you have your name on your bag, shut your f*cking pie hole,” he said. “I’ve been doing this my entire life, I worked my whole life, and I’ve been better than most of the world at it basically since I was 22 years old, and I don’t think anybody should be discussing anything other than us when it comes to the world golf rankings things. This is not their fight – this is our deal and they’re making it about them, not us, and it’s really frustrating.”

Robert Garrigus does not hold back. He talks Pat Perez, gives his thoughts on the job Monahan is doing, he goes in on Billy Horschel, and funny stories from the road. Buckle Up (also NSFW, like REALLY!!! NSFW)

Garrigus then began discussing the OWGR stakeholders, and categorized the DP World Tour as “soon to be canceled,” citing a lack of funding, and a pettiness about how they’ve treated LIV players who have been able to participate in events.

In perhaps his most headline-grabbing quote, Garrigus took dead aim at one player in particular.

“The douchebag Billy Horschel – he won’t shut the f*ck up and I can’t stand it,” he said.

Horschel has been one of the more outspoken PGA Tour players when it comes to LIV Golf, earning himself the nickname “The Town Crier” in some golf circles. He most recently grabbed headlines at the BMW PGA Championship at Wentworth when he called certain LIV players hypocrites and said they shouldn’t be playing in the tournament.

French then asked Garrigus for his thoughts on how Jay Monahan has handled the disruption caused by LIV Golf. Garrigus was complimentary of Monahan as a person, but not so positive when he discussed his performance over the past year or so.

“It’s a mixed bag, to be quite honest. Every single guy that I’ve talked to said that he’s probably going to be gone in the next year or two. He’s a really nice guy, but he’s not a very good wartime president. He didn’t really prepare for this, and we all know it, and he knows it. All of a sudden, they find hundreds of millions of dollars out of nowhere, and say that this is what we planned on doing, and that’s bullsh*t.”

Garrigus went on to criticize Monahan and his team for not taking the threat of LIV Golf seriously as the league started to gain momentum.

“They’ve known about this for years, and basically dismissed everything that Greg Norman was going to do, like, ‘Oh he can’t get a tour going. He won’t be able to sustain it,’” he said. “I think the people on the PGA Tour, including myself, know that Jay’s gotta…I don’t think he needs to be fired, but I think there needs to be somebody in there that might have some balls.”