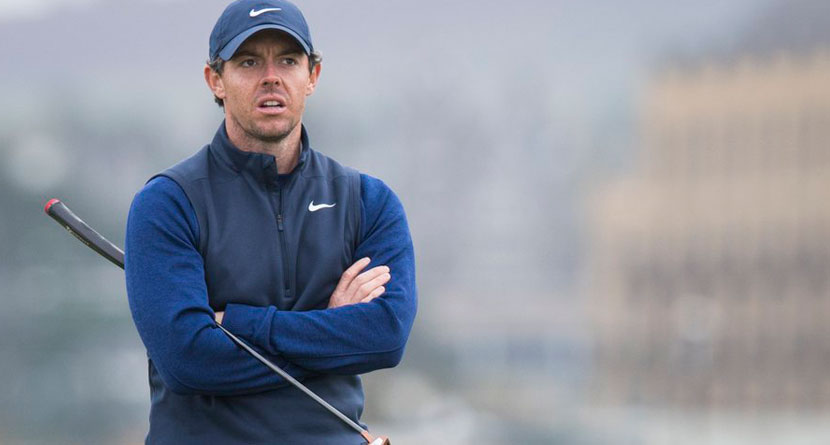 Rory McIlroy shot 15-under par across four days at the Alfred Dunhill Links Championship this past weekend and finished in an eight-way tie for 26th place seven shots behind eventual champion Victor Perez.

After his round, McIlroy vented his frustrations with the European Tour’s course setups as not challenging enough for the best players in the world.

“I’m sort of honestly sick of coming back over to the European Tour and shooting 15-under par and finishing 30th,” McIlroy told GolfDigest.com’s John Huggan. “I don’t think the courses are set up hard enough. There are no penalties for bad shots. It’s tough when you come back and it’s like that.

“I don’t feel like good golf is regarded as well as it could be. It happened in the Scottish Open at Renaissance. I shot 13-under and finished 30th (actually T-34) again. It’s not a good test. I think if the European Tour wants to put forth a really good product, the golf courses and setups need to be tougher.”

“I think if the European Tour wants to put forth a really good product, the golf courses and setups need to be tougher.”

Rory made it clear he’s tired of easy setups on the European Tour and will look to play more in the U.S. again in 2020.https://t.co/TVjripYkYi

Playing alongside his father, Gerry, in the pro-am format that covered three of the most coveted courses in Scotland — the Old Course at St. Andrews, Carnoustie and Kingsbarns — the duo finished second in the team tournament behind Tommy Fleetwood and Ogden Phipps II.

Coming off of a season that saw McIlroy only participate in four “regular” European Tour events, his comments seem to further indicate that he will continue to be set up his future schedule more around the PGA Tour than his home European circuit.

“Winning the FedEx Cup was validation of my decision to play more in the States,” he said. “I’m getting stick (for not playing more in Europe), but I’m turning down millions of dollars (by not going) to Abu Dhabi and Saudi Arabia because I want to do the right thing. I want to play on the courses I want to play at. I don’t think I should get stick for that because I feel like I’m doing the right thing.

“It’s been a great year. I’ve won big events and I’ve consistently played well. Every week I show up and I shoot good scores and play good golf. If I continue to do that, I’ll be in a good spot. I don’t want to travel that much anymore. I’ve done it for 12 years. I want to have easy flights and not have to go across eight, nine time zones and have to get acclimatized. I’m happy to do what I’ve done this year.”

Naturally, McIlroy’s comments weren’t met with great acclaim in European golf circles, and McIlroy did backtrack on his comments slightly on Monday morning, posting to his Instagram page that the Dunhill Links wasn’t the proper place to air his grievances although he stands by the overall message he was conveying.

“I understand voicing concerns about golf course set-ups in Europe to the media at a pro-am event on benign links courses wasn’t the right place to do it, or the right people to talk to about it. I was venting yesterday, but I can assure you it came from the right place,” McIlroy wrote.

“Strategy, course management and shot-making are important aspects of tournament golf that are being slowly taken out of the game at the top level, not just in Europe but worldwide. I would personally like to see tougher set-ups in Europe because it will produce better, more complete, young players in the future and that can only be a good thing for the game and our Ryder Cup chances.”

McIlroy is planning to play next in The Challenge: Japan Skins alongside Tiger Woods, Jason Day and Hideki Matsuyama then in the PGA Tour’s Zozo Championship later that week. After that, he plans to play the WGC-HSBC Champions in China before wrapping up his year in Dubai at the DP World Tour Championship.