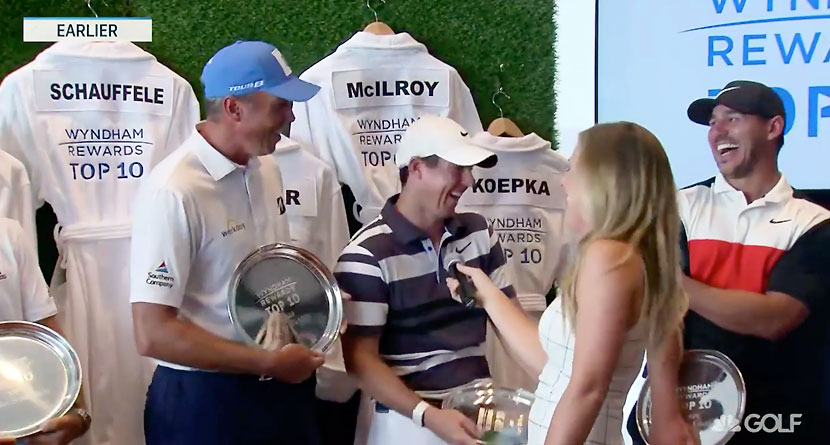 An oft-repeated cliche on the PGA Tour is that “every shot counts.” At this time of year, we realize just how valuable a missed tap-in can be as players on both the PGA and Korn Ferry Tours are securing or losing their cards for next season.

While on the periphery, one shot here or there could be the difference in job status for a player; on the upper echelon of the PGA Tour, one shot can have a massive influence on a players’ bonus payout, as was the case near the top of the season-long standings.


With the FedEx Cup Playoffs kicking off this week at The Northern Trust at Liberty National, the top-10 players in the standings were awarded a silver plate for their finishes, and the lucrative payouts were announced.

Brooks Koepka locked up the $2 million top prize following his victory at the WGC-FedEx St. Jude Invitational, but Rory McIlroy’s T4 finish (120 FedEx Cup points) allowed him to finish ahead of Matt Kuchar who placed T43 (13 FedEx Cup points) at the St. Jude by two points. As it turned out, one shot better from Kuchar would have moved him into T40 and earned him four more points.

So, what’s the big deal? The difference between second and third in the season-long standings and in the Wyndham Rewards payout was $300,000, as Kuchar laid out at the awards ceremony.

Getting a good reaction out of his fellow pros, McIlroy stole the show.

“We all know what money means to him,” McIlroy joked, a reference to Kuchar’s much-publicized dust-up with his temporary caddie at this season’s Mayakoba Golf Classic.

To Kuchar’s credit, he seems to spit out, “Fair!” in response to McIlroy’s jab.

The best part of the video, however, was how funny not only McIlroy found his own joke, but Brooks Kopeka and Xander Schauffele reacted on the edge of the frame.

While neither McIlroy nor Kuchar will be losing sleep over a few hundred thousand dollars, they both are in prime position to claim much more than the $300,000 that McIlroy was able to usurp in this month’s Playoffs.

The winner of the FedEx Cup goes home with $15 million, while second place gets $5 million, third gets $4 million, fourth gets $3 million, and fifth gets $2 million.