Rory Was Annoyed By Phil And Rickie At 2014 PGA 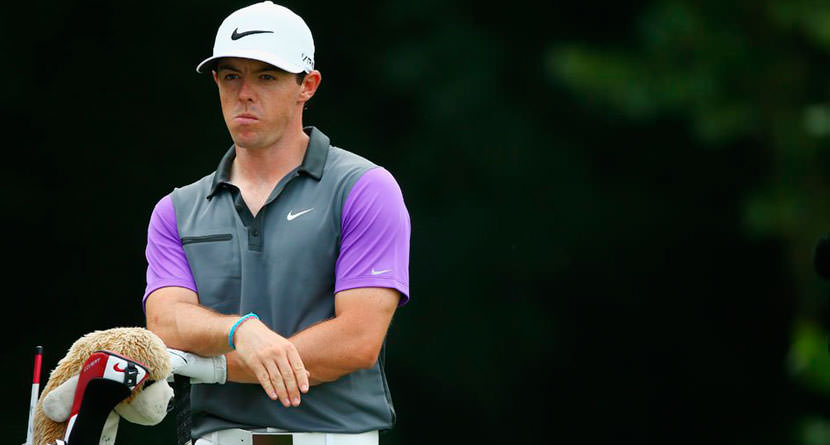 One of the joys of being a golf fan in this modern era is having Rory McIlroy as one of the faces of it. The 27-year-old Northern Irishman has made more money than he could ever spend while still seemingly scratching the surface of what his potential could be. That cocktail results in McIlroy being more true to himself in his public life, which in turn, gives the ordinary fan a peek behind the curtain rarely given by a sport’s top player.

Speaking with the Irish Independent‘s Paul Kimmage for the second installment of their two-part interview, McIlroy again opened up, this time about his personal life, his meltdown at the 2011 Masters, his realization that it was okay to win and much more. The quote that struck a chord with most of the golf world, however, came from his conversation about the 2014 PGA Championship.

PK: There’s a brilliant passage about that final round in Valhalla in Slaying The Tiger by Shane Ryan. There’s a delay on one of the tees, and Mickelson and Fowler are there, and they want to engage you, but you’re not having it. You’re staying in your zone: ‘We’re not pals here. This is war.’

PK: How conscious were you of that?

RM: I was conscious of it. I was over-par on the front nine and struggling a bit and I see the two boys ahead chipping in and holing putts. And I saw them fist-pump coming off one of the greens and remember thinking: ‘What the f*** are they doing?’

RM: ‘This is a Major championship! You’re trying to beat each other! This isn’t the Ryder Cup here!’ And it did, it annoyed me. I thought: ‘I’m going to beat these two.’ And that’s sort of what turned it for me, and probably what he’s talking about. There was a wait on a tee and . . .

PK: I have the passage here: “An early weather delay had forced the PGA of America to condense the later tee times, and things got so slow in the early afternoon that multiple groups began to stack up on the tee boxes. That was the case on the sixth, when Rory arrived to find Mickelson and Fowler still waiting to hit their first shots on the long par four. Bernd Wiesberger, Rory’s playing partner, walked over to the two golfers and made polite conversation. It’s what you’d expect – despite the pressure, social decorum dictates that you exchange pleasantries, and pretend it’s just an ordinary round on an ordinary day. JP Fitzgerald, Rory’s caddie, did the same. Phil and Rickie gazed down the fairway and held a halting conversation – something about golf courses they’d played – and Phil mindlessly juggled a ball, tap, tap, tapping it with the face of his hybrid. As they waited, a strange kind of energy took over the scene, and it emanated from the man who wasn’t talking. Ten feet away, Rory McIlroy sat on a bench, seething and motionless, hard eyes fixed on empty space. It was hard not to notice that he hadn’t offered any greeting to his fellow golfers – not a wave, not a tilt of his head, not so much as a spare look in their direction. He simply sat down and glared.”

RM: That would be about right.

This isn’t the first time McIlroy shared his feelings about Phil and Rickie during that fateful day at Valhalla. During a June 2015 interview with David Feherty, he broached the topic as well.