Rory Calls on Best Man To Caddie at WGC, PGA 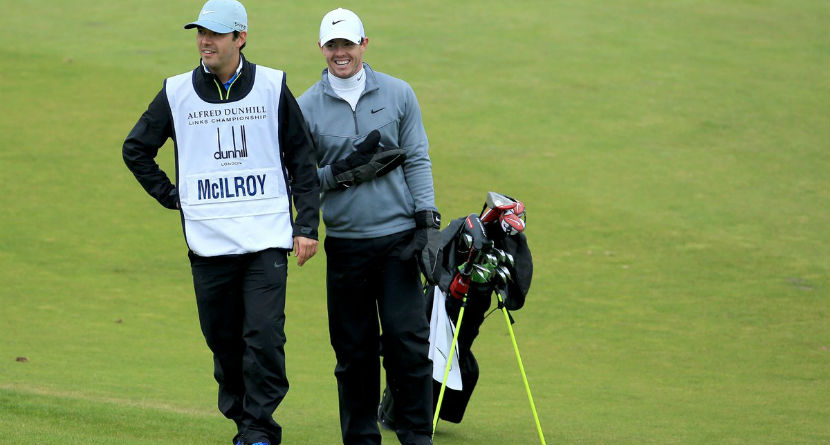 In a pinch for a caddie? Call your best man. Following Monday’s shocking news that Rory McIlroy was splitting up with longtime caddie J.P Fitzgerald, it appears the four-time major winner is turning to his best friend Harry Diamond to carry his bag at least for the next two events, both of which are among the biggest on the schedule.

The Telegraph’s James Corrigan of has the report:

McIlroy is playing in this week’s WGC Bridgestone Invitational in Akron. Harry Diamond will take the bag and will also be on the world No 4’s shoulder at next week’s PGA Championship.

Quail Hollow will be McIlroy’s last chance to win a major in 2017 and so avoid a third successive majorless campaign in a row.

In the caddyshack, the development was not greeted with too much surprise. And do not expect an overload of sympathy either, and not just because Fitzgerald is estimated to have earned more than £8m ($10.57M) in his employment with McIlroy.

“It was coming,” one caddie told Telegraph Sport

It appears Rory has found his replacement … at least for the next 2 events: https://t.co/mdiud3bRUJ pic.twitter.com/sRBfQy3na4

Yet the timing is curious to say the least and suggests that there had been no planning in this parting of the ways. Apart from the few months at the start of his professional career, McIlroy has only known Fitzgerald in his corner.

Diamond could even prove the permanent solution. A childhood friend who grew up in the same Belfast suburb of Holywood, Diamond is a fine player in his own right, having played with McIlroy in the Ulster youth team and going on to represent the Irish senior team.

And he has caddied for McIlroy before. When the then 16-year-old prodigy was invited to play in the Irish Open in 2005, it was Diamond who was on his bag. The pair are extremely close, with Diamond reportedly acting as best man at McIlroy’s wedding to Erica Stoll in April.