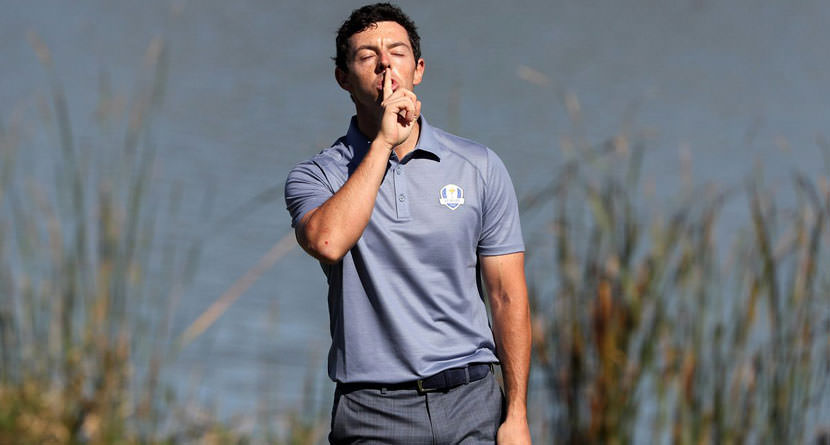 Rory McIlroy has had a little more time on his hands lately now that he’s holed up with a stress fracture on one of his ribs. The World No. 2 can only watch so many movies before curiosity sets in and he hops on social media, so it should come as no surprise that McIlroy found a familiar foe in the Twittersphere that he decided to take to task over the driver swing.

Golf Channel analyst Brandel Chamblee is rarely shy with his opinions, however, and his latest controversial stance stems from the driving display put on by Justin Thomas in Hawaii last week.

Chamblee put out an unusual and unpopular opinion about how professionals hit their drivers, arguing that most actually hit down on the ball as opposed to the conventional and accepted knowledge that players hit up with the big stick.

That’s when Rory came in. As one of the best drivers of the golf ball on the planet, his words carry some extra weight.

@chambleebrandel @flightscopePhD It’s 2017 and Jordan is hitting a 3 wood in that photo. To get the most out of modern equipment you need to hit up on the driver. #fact pic.twitter.com/sBGGMN9lBn

Plus, McIlroy added this little nugget for good measure, and to rub some dirt in the wound he opened.

Pretty sure hitting up with your driver works @chambleebrandel ? pic.twitter.com/OLU3ZO815C

@chambleebrandel Last thing I’ll say on this… my hands are ahead at impact and I’m at least 3 degrees up with my driver. There’s more than one way to do it pic.twitter.com/pRPLnb89y1

Whether or not McIlroy changed Chamblee’s mind or not, it seems the two have found some common ground after Brandel backpedaled a bit as the “feud” was put to bed.

Agreed, many ways to play this game,but the best drivers, yourself included, had a lot in common. Hands way ahead, is not one.@McIlroyRory pic.twitter.com/qoS7Gc7M6j