McIlroy Says A Koepka Rivalry Is Good For The Game 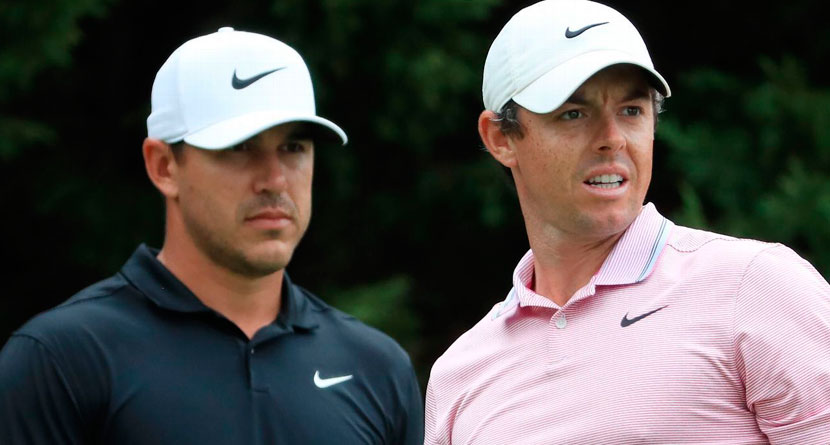 Rivalries in professional golf routinely result in a lot of hype and little substance, but that doesn’t stop media, fans and even players from yearning for the next possible clash.

Over the last decade, one constant in the litany of possible rivalries has been Rory McIlroy. Deemed by many to be the biggest star in the post-Tiger Woods era, McIlroy has done well in an awkward position with so much pressure placed upon his shoulders, but now he’s ready to take on his next challenger: Brooks Koepka.

Talking to Carson Daly on their GOLFPASS podcast, McIlroy said he’s excited about the most recent rival to step into the ring, especially given Koepka’s ascension to the top of the world rankings over the last few years.

“It’s nice there’s a common denominator and it’s usually me, which means that I’m doing something right.”

“If that’s both of our mentalities going forward, I think that’s good for the game.” https://t.co/9Z770befDk

While the contrived rivalries never really mattered too much to McIlroy in the past, he opted to embrace the mindset of taking down Koepka at the Tour Championship at East Lake after Koepka “dusted him” in the final round of the WGC-FedEx St. Jude Invitational in Memphis a few months earlier.

“I needed that mentality going into East Lake because, you know, there was a little bit of revenge in there. He talked about trying to be the dominant player in the game, and that was said to me in the media, and I said, ‘He’s going to have to go through me first.’

“If that’s both of our mentalities going forward, I think that’s good for the game.”

That kill-or-be-killed mentality proved to work well for McIlroy as he won the Tour Championship and FedEx Cup as well as the $15 million first prize that went along with it.

Eamon’s Corner: Golf needs Koepka v. McIlroy. This has the makings of a great rivalry. And no one else is in that conversation right now. pic.twitter.com/f9NLgovSDv

“There was chit chat in Memphis,” McIlroy said. “We were cordial, and he again was playing great, I couldn’t get anything going. I purposely tried not to talk to him much in Atlanta. I tried to do my own thing, stay in my own world. We’d obviously say ‘good shot,’ do all that stuff you’re supposed to do in golf.

“I don’t think we had one conversation. Like I said, it was big stakes. He felt like he was the best player of the year and he wanted to finish it off by winning the season-long championship. I wanted to finish off my season on a positive note. That’s sport.”

The conversation around the McIlroy-Koepka rivalry only was intensified by McIlroy’s winning of the PGA Tour’s Player of the Year award. While it may not directly have caused animosity, given Koepka’s keenness to manufacture slights — real or imagined — McIlroy besting him at East Lake coupled with winning POY should be enough to keep Koepka’s fire burning.