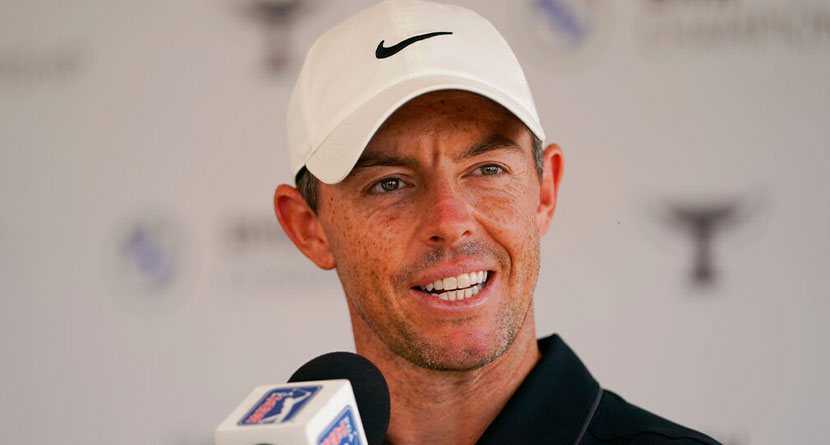 For Rory McIlroy, speaking about the PGA Tour and LIV Golf divide has become second nature.

At the DP World Tour’s Alfred Dunhill Links Championship at St. Andrews this past week, where McIlroy finished fourth, the four-time major champion was asked about the two tours once again and this time, he said the two need to figure out a way to work together.

“I’ve always said I think there is a time and a place where everyone that’s involved here should sit down and try to work together,” McIlroy said. “It’s very hard for that to happen right now when there are two lawsuits going on.”

As the battle between LIV Golf and the PGA Tour rages on in the legal world, only three names currently remain on the lawsuit against the PGA Tour — Peter Uihlein, Bryson DeChambeau and Matt Jones along with LIV Golf. Phil Mickelson was the most recent big name to pull his name off the suit.

McIlroy also spoke out about the lawsuit and the game of golf itself right now.

“But saying that, I don’t think we can let it go too much longer. So I’m all for everyone sitting around the table and trying to figure something out for sure.”

There has also been a large debate around LIV Golf and whether or not the players on that tour should receive Official World Golf Ranking points.

“I certainly would want the best players in the world ranked accordingly,” McIlroy said. “I think Dustin Johnson is somewhere around 100th in the world. It’s not an accurate reflection of where he is in the game. But at the same time, you can’t make up your own rules.

McIlroy is currently the second-ranked player in the world and has long been the voice of the PGA Tour through the LIV Golf saga.

Last week before the President’s Cup, PGA Tour commissioner Jay Monahan said that a truce with LIV Golf is “off the table, and it has been for a long period of time.”

LIV Golf commissioner Greg Norman has echoed those sentiments. As of right now, it doesn’t look like Monahan and Norman will be talking things out any time soon.