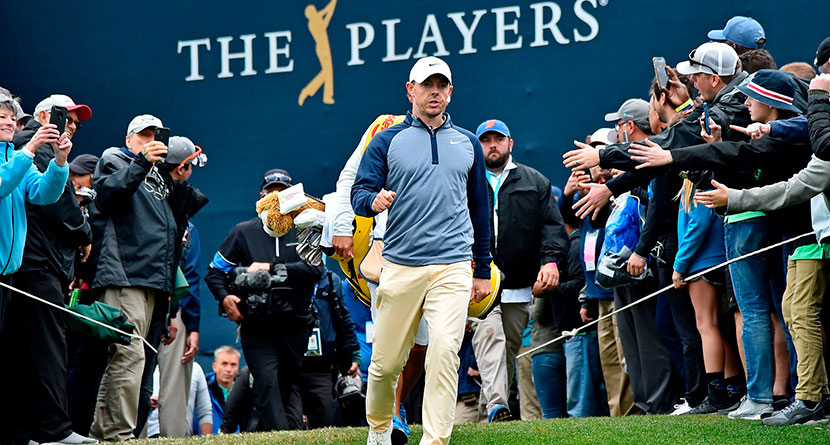 This year’s Players Championship is the first to be played on the famed Pete Dye-designed TPC Sawgrass Stadium Course since the architect died earlier this year in January.

As one of the more prolific winners at Dye designs in recent years, Rory McIlroy was asked on Tuesday in his pre-tournament press conference about the late course designer, his feelings about his courses and how he has acquired a taste for the style of play that is required to win on his layouts.

In typical McIlroy fashion, the world No. 1 gave a thoughtful answer that included an analogy to the taste young people develop for alcohol.


“The 2010 Whistling Straits was when I turned a corner,” McIlroy said of his taste-acclimation journey. “I turned up there, it was the PGA Championship, and I hated it; like I really did not like it. I had to tell myself, ‘look, you just need to like it for one week. Just get your head around liking this place for one week and embracing the fact that it’s different and the fact that it’s visually a little funky and whatever.’

Rory McIlroy on Pete Dye courses: “They’re like beer when you’re younger. You sort of don’t like it, but then you think it’s cool to drink it and you sort of acquire a taste for it.”

Also: After about six of ’em, you can’t see straight anymore.

“I ended up finishing third that week and one shot out of a playoff, and I think that was when I sort of had turned a corner in terms of not necessarily loving Pete Dye golf courses — I think he’s a wonderful golf course designer, but I never liked how he made you feel on the golf course in terms of hiding things and angles, and it makes you a little bit uncomfortable, which is obviously his plan.

“He’s a wonderful designer of golf courses, but that was the week where I had to embrace what Pete tried to put into his golf courses. Going on from there, winning at Kiawah, winning at Crooked Stick, winning here (at TPC Sawgrass), I’ve started to quite like them. But as you said, an acquired taste.

“They’re like beer when you’re younger. You sort of don’t like it but then you think it’s cool to drink it, then you sort of acquire a taste for it.”

Continuing the line of questioning, McIlroy shared how he acquired a taste for TPC Sawgrass, in particular, which ironically, in part, coincided with his taste acquisition for alcohol while underage.

“I think strategy was part of it,” McIlroy said of what changed for him since missing his first three cuts in Players Championships. “I was probably more stubborn back then than I am now and trying to overpower this golf course with a driver, when in May you couldn’t do that.

“The first time I played here, the weekend before I was in Vegas for a fight and then probably didn’t prepare the best way possible and missed the cut and ended up getting kicked out of bars in Jax Beach for having a fake ID. So I’ve come a long way.”

McIlroy tees off on Thursday alongside the other two top-three players in the world, Jon Rahm and Brooks Koepka, going off the first tee at 1:51 p.m. EST.