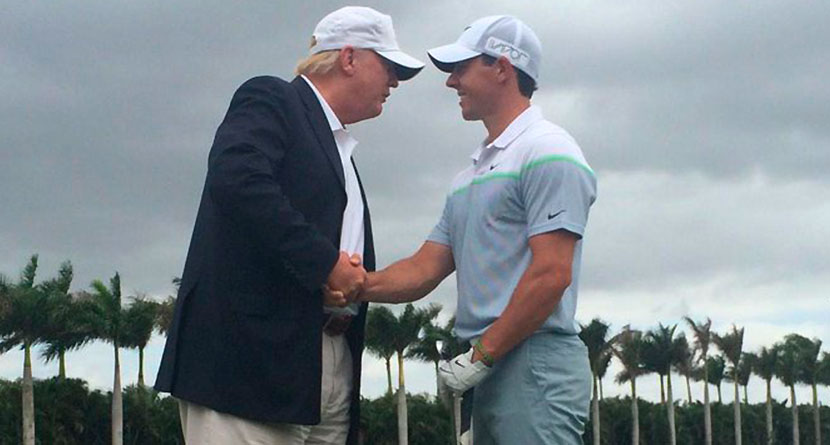 Wading into politics as a professional athlete is often a zero-sum endeavor, especially when it comes to someone as polarizing as the President of the United States.

Rory McIlroy found that out in February 2017 when he accepted an invitation to play golf with President Donald Trump at Trump International Golf Club in West Palm Beach, Florida, alongside Nick Mullen of ISM and Rich Levine, a friend of Trump’s.

McIlroy said previously, and he reiterated it last week, that he had an enjoyable day on the course with the President, but speaking on the McKellar Golf Podcast, McIlroy intimated that he wouldn’t be accepting any further invitations from Trump before diving into his opinion on Trump’s actions in response to the coronavirus pandemic.

“I always want to stay in my lane, but being more comfortable in my own skin, being married and having a very settled life away from the course and away from my carer, has definitely allowed me to be a little more opinionated,” McIlroy said. “I’ll sit here and say that the day that I did spend with him and others was very enjoyable. He’s very charismatic. He was nice to everyone. It didn’t matter whether you were me or the guys in the cart barn or the pro at the golf club.

“He has something. He obviously has something or he wouldn’t be in the White House, right? He has something, whatever it is, it’s an X-factor or it’s charisma, I don’t know. Whatever you call it, but most people that he came across that day, he was cordial, he was nice, he was personable and that’s my only real interaction with him.

“We’re in the midst of something that’s pretty serious right now and the fact that he’s trying to politicize it and make it a campaign rally and say we’re administering the most tests in world like it is a contest—there’s something that just is terrible.” https://t.co/fA0TmkN6qL

“So I will sit here and say that the day I had with him I enjoyed but that doesn’t mean I agree with everything, or, in fact, anything that he says.

“We’re in the midst of something that’s pretty serious right now and the fact that he’s trying to politicize it and make it a campaign rally, saying that (the U.S.) administers the most tests in the world like it’s a contest. It’s just not the way a leader should act and there is a bit of diplomacy that you need to show and I just don’t think he’s shown that, especially in these times.”

Asked if he’d play with Trump again if given the opportunity, McIlroy noted that he’d be surprised by another invite after what he said in the last 30 seconds.

“I don’t know if he’d want to play with me again after what I just said,” McIlroy responded. “I know it’s very self-serving of me to say ‘No’ and if I don’t, then it means then I’m not putting myself in position to be put under scrutiny and that I’m avoiding that.

“But I probably wouldn’t, no.”

President Trump phoned into Sunday’s broadcast of TaylorMade Driving Relief, an 18-hole exhibition that featured McIlroy, Dustin Johnson, Rickie Fowler and Matthew Wolff, and when teed up to respond to McIlroy’s comments by host Mike Tirico, Trump opted to sidestep any mudslinging.

In a surprise drop in phone call during the #DrivingRelief DrivingRelief charity match, President Trump discusses reopening competition in sports. Take a listen. What are your thoughts? pic.twitter.com/VcVnPgyjvo

“A lot of them are very political, actually,” Trump said of Tour pros and their opinions on politics. “A lot of them like my politics very much and some don’t, I guess, the ones that don’t I don’t get to see as much.”