Rory Teed It Up With Donald Trump On Sunday 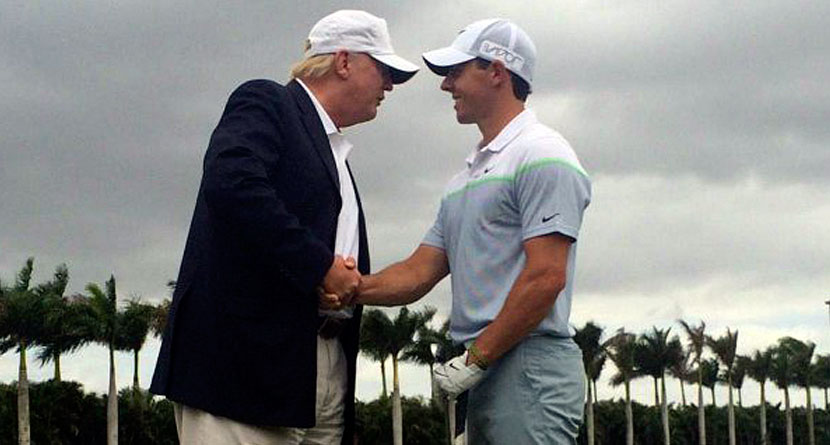 Rory McIlroy played his first full round of golf on Sunday since being sidelined with a stress fracture in his rib just over a month ago, and he did so alongside U.S. President Donald Trump, according to No Laying Up’s Chris Solomon.

Solomon spoke with McIlroy following the round and reported that the Northern Irishman made an exception to his expected timeline when he received the last-minute invite from Trump.

Rory McIlroy teed it up with the president of the United States, Donald Trump on Sunday morning at Trump International. McIlroy rode in the cart for all 18 holes with the president, and told No Laying Up the following:

The four ball was rounded out by Nick Mullen from ISM, and Rich Levine (a friend of Trump’s).

Rory said that he did not get the call to play until Saturday night asking if he would play Sunday morning. McIlroy is nursing a stress fracture in his rib, and was not planning to play golf until the following weekend, but said he had to make an exception for the president.

McIlroy also said that he played off the forward tees but did hit some drivers, and that TrackMan was telling him that his swing was nearly at full speed. Rory also confirmed to No Laying Up that his rehab is going according to schedule, and he plans to play in the WGC-Mexico Championship next week as scheduled.

McIlroy was forced to ratchet back his schedule heading into the first major of the season, but with his expected return at next week’s WGC-Mexico Championship, as well as possible starts at the WGC-Dell Match Play and Arnold Palmer Invitational in mid-Marc, McIlroy should be ready to go for Augusta.