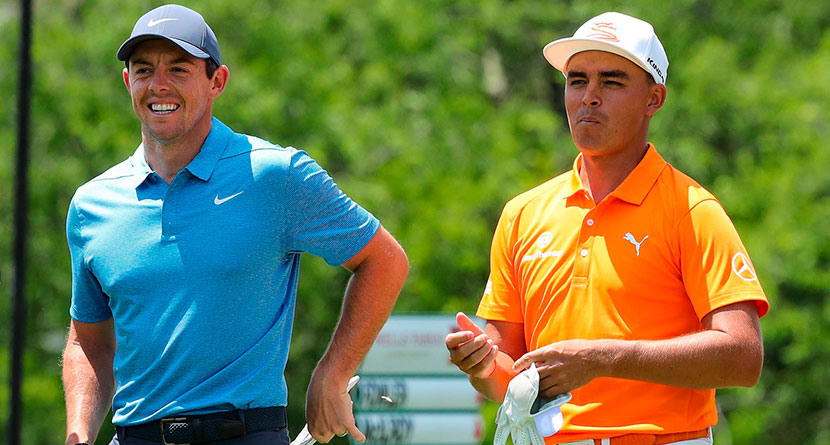 All of a sudden, we’re less than two weeks away from live golf taking place thanks to a combined effort from TaylorMade and four its most high-profile staffers.

While the equipment company’s most high-profile client, Tiger Woods, prepares for a charity benefit of his own — rumored to be taking place on May 24 — Rory McIlroy, Dustin Johnson, Rickie Fowler and Matthew Wolff are taking part in a two-on-two match on May 17 at Seminole Golf Club to benefit COVID-19 relief.

The TaylorMade Driving Relief event will feature McIlroy and Johnson as teammates against former Oklahoma State Cowboys Fowler and Wolff in a $3 million charity benefit pledged by UnitedHealth Group.

Each team will represent a good cause with McIlroy and DJ playing for the American Nurses Foundation and Fowler and Wolff playing for the CDC Foundation. Farmers Insurance is also donating a $1 million for a birdies-and-eagle pool to benefit Off Their Plate, a COVID-19 healthcare workers charity.

The two-man teams will raise money and awareness for the American Nurses Foundation and the CDC Foundation.https://t.co/WwsJDgFRVP

“It’s been difficult to witness what so many are enduring over the last several weeks due to the COVID-19 pandemic,” McIlroy said in a statement. “I’m excited and thankful to TaylorMade and UnitedHealth Group for making this event possible and providing us with the opportunity to show our support of those on the frontlines. I hope that we can provide some respite and entertainment for those tuning in across the globe.

“Dustin and I will have a lot of fun together and our games will fit well as we push to raise funds and awareness on May 17.”

In doing a few interviews following the announcement, the DJ teased that he and McIlroy had relatively planned to tee it up together earlier this year at the Zurich Classic of New Orleans, the Tour’s lone official team event.

Featuring the top-ranked player in the world in McIlroy and former No.1 / current No. 5 in DJ, the McIlroy-Johnson pairing is the odds-on favorite to win, according to The Westgate Las Vegas SuperBook who McIlroy and Johnson as a -200 favorite.

That doesn’t mean Fowler and Wolff are intimidated, however.

.@matthew_wolff5 and his mentor @rickiefowler are teaming up for the #DrivingRelief charity match to support COVID-19 front line workers on May 17.

The event will be broadcast from 2-6 p.m. ET on NBC, Golf Channel, NBCSN and Sky Sports, and will be streamed for free on PGA Tour Live (NBC Sports Gold and Amazon Prime Video), GolfPass, GolfChannel.com.