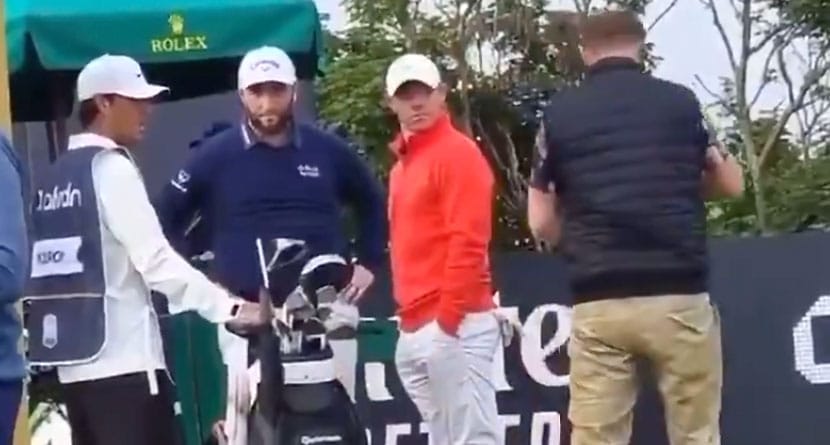 After a disappointing opening round at the abrdn Scottish Open, Rory McIlroy’s second round started even more bizarrely as a fan stole a club from McIlroy’s bag on his first tee of the day.

Standing on the tee box waiting to play away, McIlroy, alongside his caddie, Harry Diamond, and one of his playing partners, Jon Rahm, watched as a fan made his way onto the tee box and reached into McIlroy’s bag nonchalantly.

The fan originally went for McIlroy’s driver and its signature Saint Bernard headcover. When the club wouldn’t cooperate, the fan doubled back for an iron and made his way to the teeing area where he took a few swings with the four-time major champion’s club.

“At approximately 8 a.m. on Friday morning, a spectator entered the 10th tee area. He was quickly escorted from the tee by security personnel and the matter is now in the hands of Police Scotland,” a spokesperson for the European Tour told ESPN.

“He appeared on the tee, took the headcover off Rory’s driver in the bag then took out an iron and had a couple of swings with it,” an onlooker told The Scotsman.  “When someone told him that he couldn’t do that, he replied by saying ‘why not?’

“At that point, the security people assigned to following the group moved in and took him away.”

“He was quickly dealt with,” David Wilson, a fan who witnessed the incident, told The Daily Record. “The players laughed it off, saying they knew he wasn’t a golfer when they saw his grip.”

This was the second similar fan situation in the world of golf in the past four weeks.

Last month, a fan snuck under the ropes and past security onto the 13th fairway at Torrey Pines with a golf club and two golf balls in tow during the final round of the U.S. Open.

Upon the fairway, the fan dropped the two balls and hit the first into the canyon that abuts the hole with a surprisingly good swing. Former major champion and current Sky Sports analyst Rich Beem caught the whole thing on video.

Via @beemerpga on Instagram, the best streaker golf has really ever seen. Clubs in hand, hit a few shots! pic.twitter.com/TVyL7IycCD

According to The New York Post, the streaker, 24-year-old Connor Murphy, was able to avoid jail time thanks to help from his father and a friend. Murphy’s Instagram posts suggest he was hoping to spread awareness for pride month.