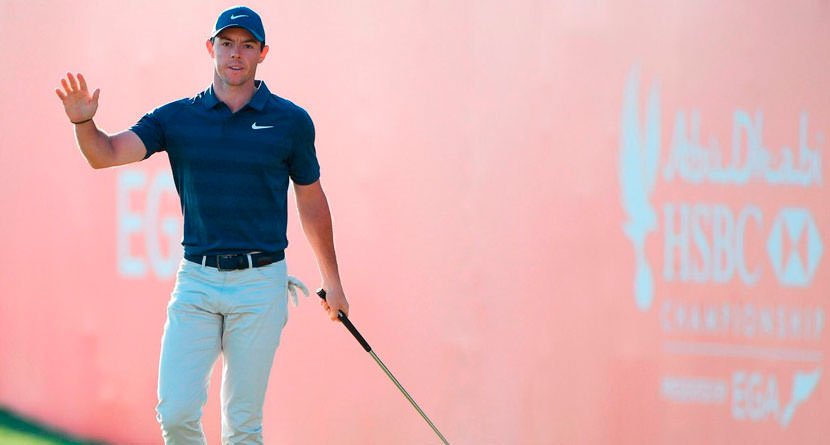 2018 is set up perfectly to be a bounce-back year for Rory McIlroy. Coming off of his first winless season since 2008, a rejuvenated and healthy McIlroy kicked off his campaign in the Middle East at the Abu Dhabi Championship.

Although he wasn’t able to take home the trophy — defending champion Tommy Fleetwood made that a very tall task — McIlroy left his first tournament of the year happy with what he saw out of his game and what he expects to come later this year.

Excited to be back…with this guy ????…at the @ADGolfChamps ⛳️ pic.twitter.com/QvD7TNQnOu

McIlroy shot a two-under 70 to close the Abu Dhabi HSBC Championship on Sunday, good enough for a T3 finish. He shot 65 Saturday to enter the final round one off the lead, but Englishman Tommy Fleetwood made six birdies over his final nine holes en route to a two-shot victory over Ross Fisher. McIlroy and Matthew Fitzpatrick were four back.

“I’m really happy how I played this week,” McIlroy told reporters afterward. “My game is in really good shape and I saw some really, really positive signs. So I’m looking forward to next week in Dubai and obviously looking forward to the rest of the season.”

McIlroy made the turn in two under on Sunday but settled for pars on Nos. 10-16. He bogeyed 17 before making a birdie on 18.

McIlroy, who was winless in an injury-plagued 2017 (he also changed caddies) and has now dropped to 11th in the World Ranking, was making his first start since the Alfred Dunhill Links Championship Oct. 5-8 in Scotland.

“Where I’ve come from the last three months just in terms of my health and my golf and everything, I’m in a much better place now than when I sort of left the game for a little bit in October,” McIlroy said. “Really happy with that, and yeah, just looking forward to getting back at it again next week and trying to put myself in contention again.”

The 28-year-old has a busy schedule leading up to the Masters. After Dubai, McIlroy is scheduled to play three consecutive weeks in the States, starting with the AT&T Pebble Beach Pro-Am on Feb. 8. He’ll follow that up with the Genesis Open and Honda Classic.