Rory Fires Back At Brooks Over DJ Comments 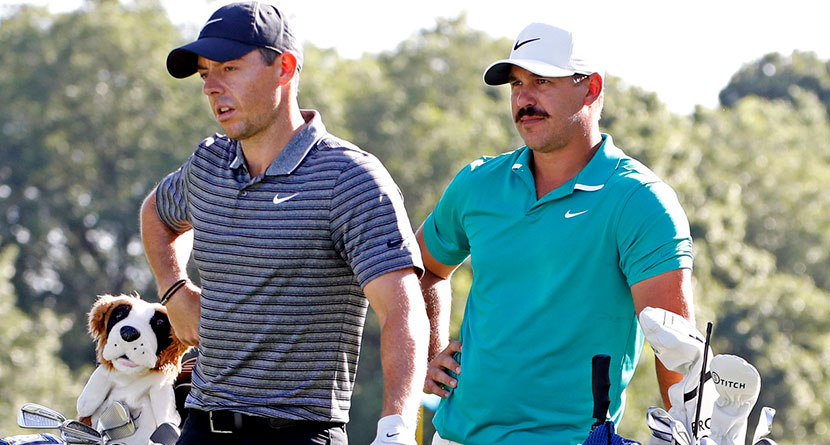 Brooks Koepka has said on numerous occasions that he doesn’t view Rory McIlroy as a rival, and perhaps that’s true, but it’s hard to deny there are some bubbling undertones to something, especially following this past week’s PGA Championship.

It all started on Saturday night when Koepka, sitting two strokes behind 54-hole leader Dustin Johnson, remarked that among those in contention, he was the most accomplished in the major championships.

Of course, Koepka didn’t word it that way; he said it in way that many took to be disparaging of those around and above him on the leaderboard, especially DJ.

After giving a quick rundown of his day on the course, Koepka was asked if he thought winning a second major was harder than winning his first, and he took his first shot at the solo 54-hole leader.

“Well, if you look at the top of the leaderboard, I’d say yes,” Koepka said. He doubled down by reiterating his “top of the leaderboard” jab before being asked about a role reversal from last year’s PGA Championship when DJ played the role of chaser to Brooks’ leader at Bethpage Black.

“I mean, I like my chances,” Koepka said. “When I’ve been in this position before, I’ve capitalized. I don’t know, he’s only won one.”

The quote to remember from Brooks Koepka, if he and Dustin Johnson duel for today’s PGA Championship at Harding Park: “I like my chances. When I’ve been in this position before, I’ve capitalized. He’s only won one. I’m playing good. We’ll see.” #headgames

The head games Koepka was accused of playing on Saturday evening never came to fruition on Sunday with Koepka struggling in the final round to a 4-over par 74 to drop 25 spots down the leaderboard. Johnson was unable to take advantage of his lead as well, shooting a final-round 68 to be bested by Collin Morikawa’s 6-under par 64.

And while there was a little comeuppance from Koepka after the round — “Hey, wasn’t meant to be,” he said. “Three in a row, you’re not really supposed to do two in a row looking at history, but that’s all right.” — but it was McIlroy who stirred the pot after a lackluster week himself.

McIlroy, one of the pre-tournament favorites, hovered around even par for the week and eventually finished at 2-under par and in a tie for 33rd. After his final-round 68, he was asked about Koepka specifically: how he comports himself and what he says around major championships.

“It’s a very different mentality to bring to golf that I don’t think a lot of golfers have,” McIlroy said. “I was watching the golf last night and heard the interview and was just sort of taken aback a little bit by sort of what he said and whether he was trying to play mind games or not. If he’s trying to play mind games, he’s trying to do it to the wrong person. I don’t think DJ really gives much of a concern about that.

“But (it’s) just different. I certainly try to respect everyone out here. Everyone is a great player. If you’ve won a major championship, you’re a hell of a player. Doesn’t mean you’ve only won one; you’ve won one, and you’ve had to do a lot of good things to do that.

“Yeah, I mean, (it’s) sort of hard to knock a guy that’s got 21 wins on the PGA Tour, which is three times what Brooks has.”

There’s a line from a Batman movie that goes, “You either die a hero, or you live long enough to see yourself become the villain,” and it seems like this week was a turning point for Koepka.

His chip-on-the-shoulder, me-versus-the-world schtick appears to have run its course, and as happens so often in sports, the players who were encouraged all the way up the mountain are turned on once they’ve reached the top.

Not that Koepka will pay it any mind, and as Golfweek.com’s Eamon Lynch wrote about this week, nor should he as it is good for the game, but it feels as if there was a shift in the public perception of Brooks Koepka this week at Harding Park.