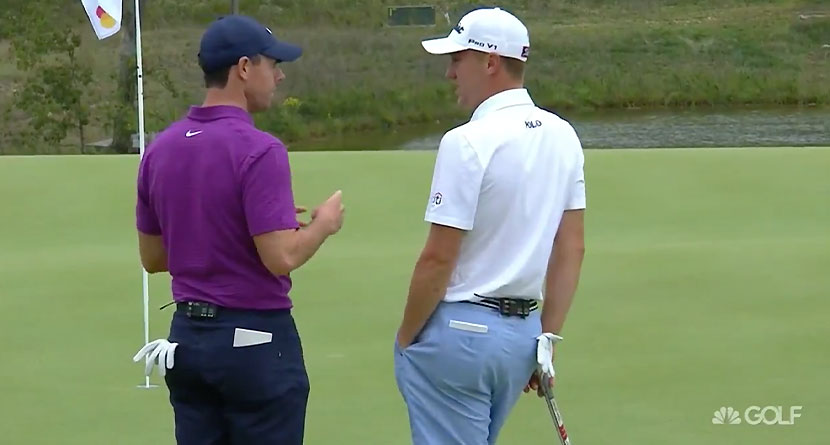 The Payne’s Valley Cup, an 18-hole charity exhibition held on Tuesday at Tiger Woods’ new public golf course at Big Cedar Lodge, was a nice change of pace for golf fans who had spent the week prior watching the best in the world grind out pars at the U.S. Open at Winged Foot.

Furthermore, the relaxed setting and made-for-television production allowed the competitors — Woods, Rory McIlroy, Justin Thomas and Justin Rose — to decompress and chat as they normally would, only with the rest of the world allowed to eavesdrop.

With some built-in competitions and challenges, there was plenty of trash talk and ribbing — mostly coming from Justin Thomas — but there were also interesting discussions that strayed a little away from the competitive realm, delving into some course design, equipment chatter and… dinner favorites?

While the three-part, 19-hole competition was won by Woods and Thomas, the biggest winners of the nearly five-hour event may have been Domino’s Pizza. That’s right, a run-of-the-mill pizza chain may have received the biggest brand activation among golf fans, second only to Big Cedar Lodge and Tiger’s new Payne’s Valley course.

The reason behind it is simple: the pizza chain has become Rory McIlroy’s go-to dinner option while out on Tour.

Hi, yes, hello @dominos – can we get a large deluxe with extra sausage delivered to @BigCedarLodge? Yeah, just put it on @McIlroyRory‘s tab. 😇 pic.twitter.com/cND8PQjEMX

“I’ll tell you what, we’re on this big Domino’s kick at the minute,” McIlroy said to Thomas, obviously catching him off guard. “It’s so good. If you don’t know what the really good local pizza place is, Domino’s is like, solid.”

“You know what you’re going to get,” Thomas responded. “Do you guys get the same pizza or change it up?”

“I get the same. I get the deluxe, but I go with extra sausage, extra whatever,” McIlroy said.

And thus started what is bound to be a beautiful relationship between McIlroy and the multinational pizza chain restaurant.

The clip has gone viral among not only golf circles, but the larger sports world in general. And on Wednesday, the pizza chain’s Twitter account finally acknowledged the clip.

I’ll tell YOU what. We’re on a big golf kick at the moment. https://t.co/fyn6gubFKb

It just goes to show you that even one of the best golfers on the planet who has millions upon millions of dollars in the bank still likes to get a little greasy on his cheat days, just like the rest of us hacks.