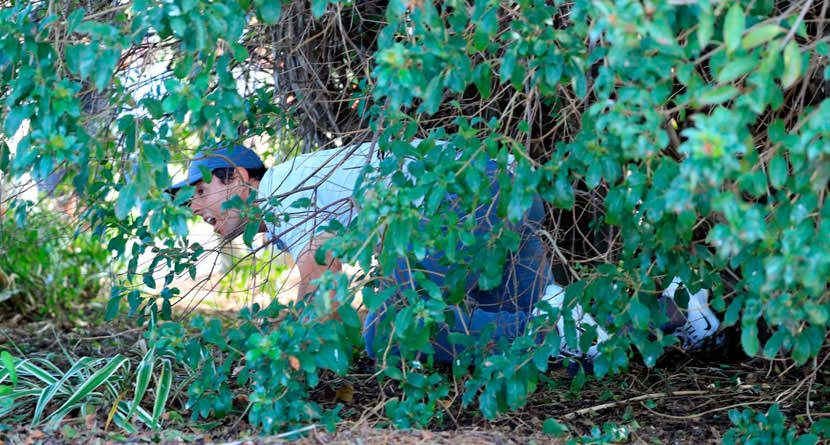 Rory McIlroy went the wrong way on moving day at the Honda Classic, but it wasn’t for lack of effort or imagination.

Clearly a man searching for a spark, McIlroy braved water and brush to try and salvage a round that was clearly not going his way. After missing a four-footer for par on the 4th hole, McIlroy’s adventure really began.

Playing the par-3 5th, the four-time major champion tugged his tee shot and it somehow came to rest on the wall that separates land from lake. And for a split second, it looked like McIlroy himself may go from land to lake.

The shot scooted some 40 feet past the hole, which led to his second bogey in a row. Now at 6-over par for the tournament and 2-over par for his round, McIlroy could ill afford any more bad breaks. He didn’t get one until two shots later.

On the par-4 6th, a behemoth of a hole that is playing as the hardest hole on the course this week, McIlroy hit an aggressive, albeit dry drive into the fairway, leaving 176 yards into the 479-yard hole. His approach flew the green and ended up in the middle of some brush that required either a 60-70 yard drop if he were to take an unplayable lie, according to the commentary team on the ground, or he could play it.

So what did Rory do?

In line with where his day was going to that point, McIlroy flubbed the following chip, hit his next shot to five feet and made the putt for double bogey. He would go on to bogey both of his next two holes, taking him well out of contention and to 6-over par for his first eight holes of the day.

To his credit, McIlroy didn’t throw in the towel and ground out a 3-under par final 10 holes to shoot a respectable 3-over par 73.

McIlroy bounced back with four birdies and a bogey to shoot 73. He’ll start Sunday 10 shots back.

“I just needed to hit some greens, hit some fairways, hit some solid shots and focus on that,” McIlroy said. “I hit some pretty good shots coming in.”

After starting the season strong with a tie for third at the Abu Dhabi Championship and finishing second at the Dubai Desert Classic, he’s looking to build on the confidence gained to get ready for the Masters in six weeks. He is playing for the third week in a row, and for the fifth week in the last six. He missed the cut at the AT&T Pebble Beach Pro-Am in his 2018 PGA Tour debut and tied for 20th at the Genesis Open last week.

“I’m so happy to be playing,” McIlroy said Thursday. “I don’t feel any ill effects, health-wise or mentally, or anything like that. Usually when you play your third week in a row, you feel like you’re looking forward to the week off. But I feel great.”