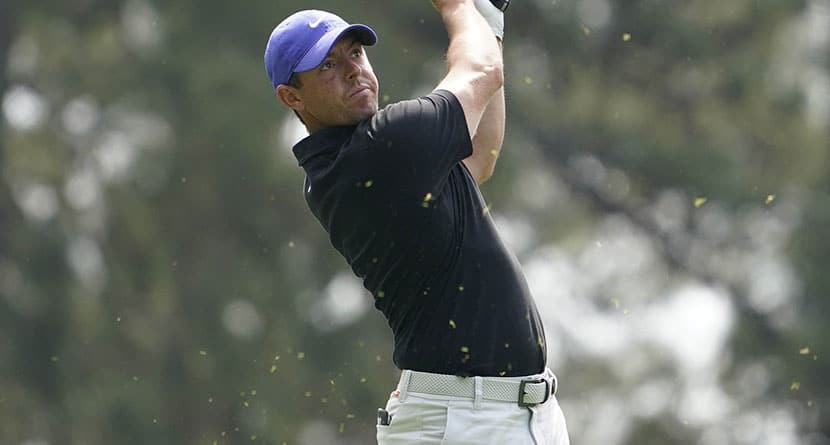 Rory McIlroy isn’t known for his fast starts at Augusta National, but with patrons back at the Masters he’s now also known for hitting his father with an errant shot.

After a steady start on Thursday that included four straight pars to start, McIlroy hit a rough patch beginning at the long par-4 fifth hole.

McIlroy failed to get up and down for par from the front of the green, then bogeyed the par-3 sixth and hit a wayward approach on the par-4 seventh hole that appeared to strike a patron walking outside the ropes well right of the green.

Rory McIlroy hit his dad with an errant approach shot on No. 7 during the first round of #theMasters pic.twitter.com/uEle8iqeyR

McIlroy was unable to overcome another slow start, firing a first-round 4-over par 76, but he was able to laugh off hitting his dad after the round.

“I was trying to turn the ball off him,” McIlroy said after the round. “It was a perfect shot; it was dead straight. But I think he was OK. He didn’t limp away, he walked away pretty swiftly, so that was all right. I knew it was my dad when I was aiming at him, so probably 30 seconds before I hit it.”

McIlroy is accustomed to signing a glove or ball when he accidentally hits a patron, but Gerry didn’t get the same treatment.

“He’s seen me sign plenty of stuff over the years, so I think that’s the least of his worries,” McIlroy added. “I think he just needs to go and put some ice on. Maybe I’ll autograph a bag of frozen peas for him.”

McIlroy’s three bogeys on the front nine weren’t much improved on the back nine as he found the penalty area twice in the first four holes. A decent finish left McIlroy at 4-over par for the day and in a tie for 60th place after round one, 11 shots back of first-round leader Justin Rose.