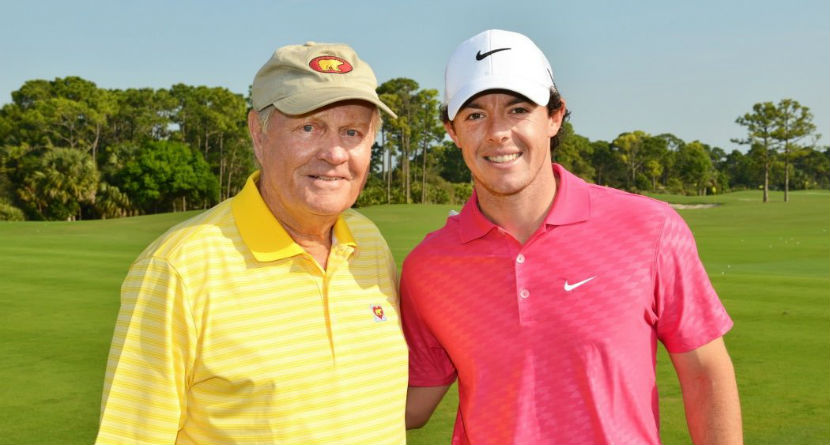 The Masters ceremonial first tee shot appears to have become a heavyweight bout between two legends as opposed to a friendly gathering. As you may recall, a couple weeks ago, Gary Player fired a shot at Jack Nicklaus over social media about outdriving him on the first tee of Augusta Thursday morning. However, the Golden Bear awoke from hibernation and enlisted the services of one of the longest drivers in the game today, Rory McIlroy.

While McIlroy is usually the one asking Jack for advice on completing the career grand slam, it was the 18-time major winner who got a technology lesson from the savvy millennial this time around. Let’s face it, these aren’t persimmon woods anymore!

McIlroy said he kept hitting it left, so he made a little tweak, and like magic, Nicklaus started hitting a little fade.

“I was like, ‘perfect, there you go,’” McIlroy said. “It’s amazing how competitive he still is. It’s unbelievable.”

On Thursday, the Masters officially got under way with an emotional tribute to Arnold Palmer (starts at 1:06):

The Honorary Starters kicked off the Masters. It’s the first time without Arnie since 1954; his presence is missed: https://t.co/gimBQole8H pic.twitter.com/GXf0NQwpmp

Then in the main event, Nicklaus edged Player by a few yards off the tee (thanks in part to Rory). What a way to open up the year’s first major!