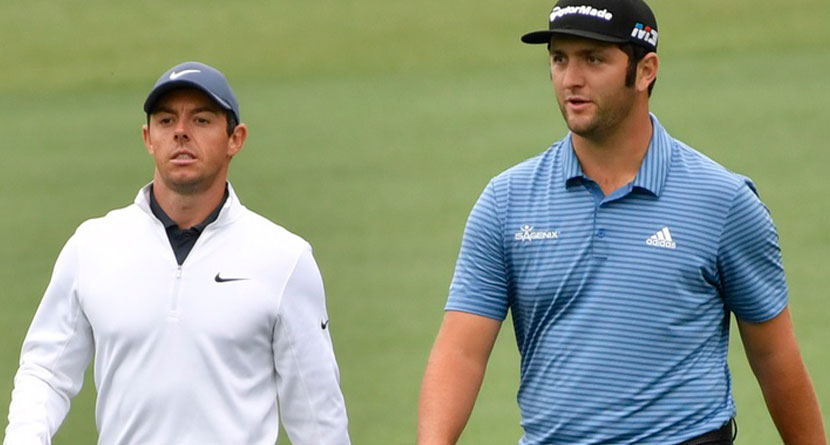 Rory McIlroy and Jon Rahm are good at golf… like really, really good, but perhaps one of the best parts about this game is that it can humble even the best in the world in a way few other endeavors can.

While you may have seen your fair share of poor golf shots on the course at your local club or muni over the Labor Day Weekend, McIlroy and Rahm hit a pair of shots during the Tour Championship at East Lake Golf Club that were it not for the television cameras and carefully scripted outfits, may have looked perfectly at home in your pairing over the weekend.

The first came on Saturday on the home hole at East Lake, a reachable par-5 for the pros. McIlroy uncorked a 371-yard drive that ran through the fairway and into a brutal lie in the rough. Trying to clear the water that he nearly drove it into, McIlroy cold topped the ball into the water, some 85 feet in front of him.

The rough at East Lake is no joke.

It happens to the best of us. pic.twitter.com/wv7cZpS7pD

“The lie was sort of iffy,” McIlroy said. “My biggest concern was trying to carry the first bunker on the right there, and I knew I needed to hit it really hard and I swung hard at it, and I got it maybe like right in the middle of the ball. I felt like if I tried to sweep it, it would be better, and I just sort of came up on it a little bit.

“Probably in hindsight trying to take on a little bit too much. So yeah, and then it would have been nice to get away with a par. It wasn’t to be.”

McIlroy was able to salvage bogey en route to a T8 finsh.

As for Rahm, his “you’ve got to be kidding me moment” was one that doesn’t seem as embarrassing as McIlroy’s but remains altogether just as relatable. Playing the par-4 6th hole on Monday in the final round, Rahm found a fairway bunker off the tee and tried to bite off a little more than he could chew.

Rahm’s ball flew into the lip of the trap and rolled nearly back to his feet, a de facto penalty stroke that led to a double bogey. Like McIlroy, Rahm bounced back from his double bogey to shoot a 4-under par round of 66 and finish in fourth place.

While it’s nice to have those relatable moments every once in a while, it’s also good to know that these guys still are really good, which was evidenced by PGA Champ Collin Morikawa who handled a plugged lie in a bunker face unlike anything you likely saw this past weekend in your normal game.

Plugged in face of the bunker … no problem for @Collin_Morikawa. #QuickHits pic.twitter.com/QzEv5Qlynn

And a lesson from the pro afterward.

“If you’re going to have it plug in a bunker, you kind of want it on a lip because you can just hit it hard and it’s going to pop straight up. Granted, it’s not like I had an easy shot there, and I was really just trying to get it below the hole to the left, 5, 10 feet for par,” he said. “I hit it, got a great bounce, and from that point it just looked like it was going to go in. Yeah, wow, what a shot.”