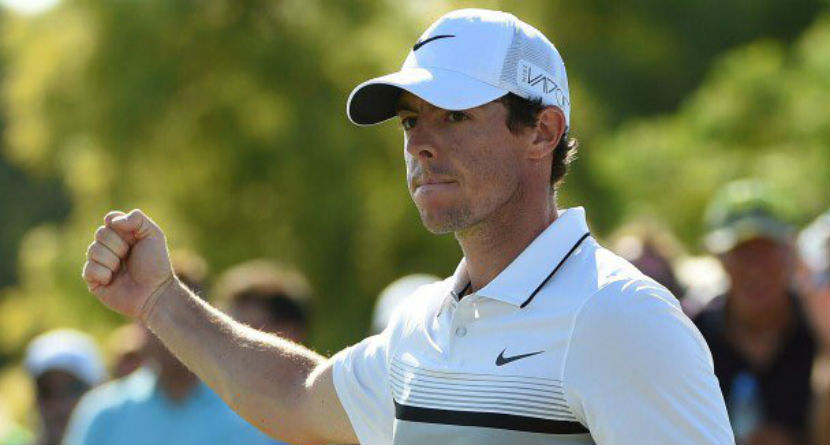 Rory’s gym routine has been well documented, especially by Golf Channel’s Brandel Chamblee. But as ripped as the 27-year-old Northern Irishman is, he won’t be challenging anybody to an arm-wrestling match anytime soon, especially an amateur golfer named Brad Dalke.

Let us refresh your memory. Dalke took it to McIlroy two years ago while he was visiting the Junior Invitational at Sage Valley. Here’s the borderline emasculating video:

As luck would have it, Dolke is in Augusta this week with a spot in the field as an amateur thanks to finishing runner-up in the 2016 U.S. Amateur. However, it appears McIlroy wants nothing to do with the jacked 19 year-old Oklahoma sophomore this time around.

“No, no arm wrestling this week,” McIlroy said jokingly during his Tuesday Masters press conference, according to a Golf Week report. “I don’t want to embarrass myself.”

In other Rory news, the four-time major winner will be teeing it up Thursday afternoon with some new equipment in the bag. Since Nike has decided to stop making clubs, Rory’s been in test mode, and the year’s first major will be no different. According to the PGA Tour’s equipment guru  Jonathan Wall, McIlroy subbed out his Callaway GBB Epic fairway metals in favor of TaylorMade’s M2 3-wood and 5-wood. He also has got a sparkling new set of Callaway Apex MBs in the bag:

Looks like Rory McIlroy has a fresh set of @CallawayGolf Apex MB’s. That’s different finish and stamping on the head. pic.twitter.com/LxrBDSY9dS

McIlroy goes off Thursday at 1:41 p.m. EST with Jon Rahm and Hideto Tanihara.