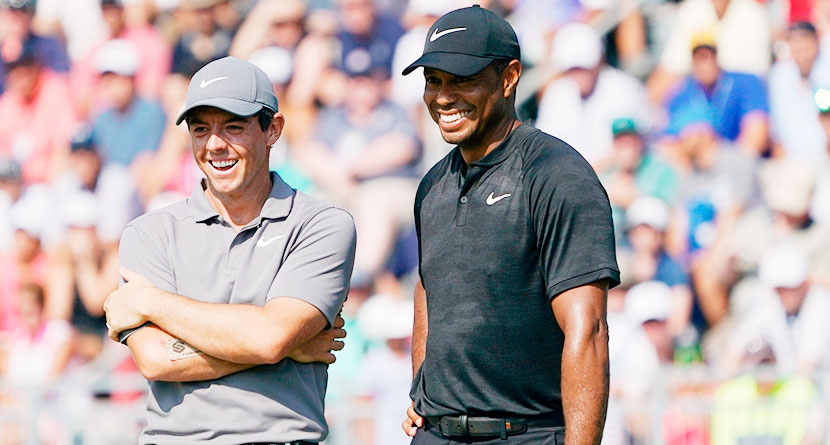 The PGA Tour’s marketing slogan is “Live Under Par,” but their “These Guys Are Good” tagline still holds astonishingly true.

Case-in-point: Wednesday at The Genesis Invitational Pro-Am at Riviera Country Club. Tiger Woods, as the tournament host — and really, because he’s Tiger Woods, got the first tee time at 6:40 a.m. off the first tee. In the second group out was Rory McIlroy.

Setting the pace, Tiger decided to have a little fun with his TaylorMade and Nike Golf colleague as he waited back in the fairway during the round. Faced with a 180-yard approach, Tiger and his right-hand-man, Rob McNamara, stayed on the green with Woods jokingly tending the flag.


As it turns out, the joke was on Tiger. McIlroy took dead-aim and nearly holed the shot, rolling it up within a few inches of the cup at Tiger’s feet.

McNamara immediately gave a salute back down the fairway to the newly-minted world No. 1 as Woods waved the flagstick and gave an amused smile towards McIlroy as he walked off the green grinning.

Thanks for hanging back to tend the pin, @TigerWoods. Almost needed you.? https://t.co/zPxLlgBtyu

Intelligently, Woods and McNamara got off the green quickly after McIlroy’s ball came to rest before any of McIlroy’s amateur partners could hit.

Woods will tee off on Thursday in the first round of the event alongside Justin Thomas and Steve Stricker at 11:41 a.m. PST while McIlroy will be a part of the morning wave, going off the 10th tee at 7:16 a.m. PST with Dustin Johnson and Patrick Cantlay.