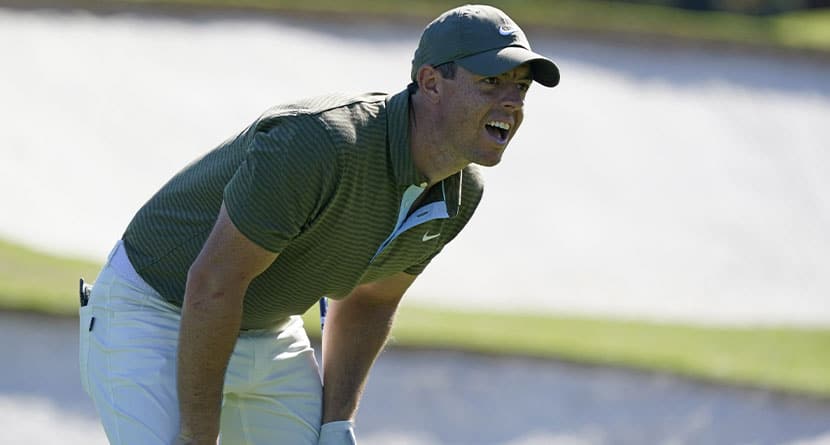 Rory McIlroy’s “slumps” aren’t the same as many of his peers’ on the PGA Tour.

McIlroy hasn’t won since the end of 2019, but he showed a trending form of play leading up to the pandemic shutdown. Ever since, however, McIlroy has sputtered in relation to his exceedingly high expectations.

He didn’t miss a cut from June 2020’s resumption of play through the end of the PGA Tour season, and during the wraparound portion at the end of the calendar year, he notched a pair of top-10 finishes at the U.S. Open and Masters.

2021 has been a little more of a slog with a pair of missed cuts at the Genesis Invitational and last week at the Players Championship, but even with those two blemishes on his results page, McIlroy has finished inside the top-20 in the four other events he’s played, highlighted by a pair of top-10s at the WGC-Workday and the Arnold Palmer Invitational.

Not exactly a slump, per se, but as his former caddie J.P. Fitzgerald once told him, “You’re Rory McIlroy! What the f*** are you doing?”

In the aftermath of his Players Championship missed cut, McIlroy allowed that he had fallen into the speed trap laid by Bryson DeChambeau to the detriment of his swing.

Asked Rory this on Friday night, and the 20-second deliberation is what makes him such a compelling athlete to cover. He decided to answer honestly, knowing what he was about to say would become a headline:

“Probably the swing issues and where it all stems from, probably like October last year, doing a little bit of speed training, started getting sucked into that stuff, swing got flat, long, and too rotational,” McIlroy stated. “Obviously I added some speed and am hitting the ball longer, but what that did to my swing as a whole probably wasn’t a good thing, so I’m sort of fighting to get back out of that. That’s what I’m frustrated with.

“I’d be lying if I said it wasn’t anything to do with what Bryson did at the U.S. Open. I think a lot of people saw that and were like, whoa, if this is the way they’re going to set golf courses up in the future, it helps. It really helps.”

McIlroy spoke in recent weeks about the issues that crept into his swing were different than he had previously dealt with, having to do with his backswing, which he and longtime swing coach Michael Bannon had been working to fix.

However, on the range at The Players, another well-known swing instructor was working with McIlroy: Pete Cowen, coach to notable players such as Brooks Koepka, Henrik Stenson, Sergio Garcia and Lee Westwood.

With rumors swirling, The Daily Telegraph reported McIlroy working with Cowen would become official, which was confirmed by ESPN.com’s Bob Harig and Golf Channel’s Todd Lewis.

“Pete is an addition to Rory’s performance team,” Sean O’Flaherty, McIlroy’s agent, wrote in a text message to ESPN.

Going further, McIlroy told Lewis that he and Bannon had been working primarily on his backswing to address his issues, while Cowen’s first move was to work on the downswing.

McIlroy and his team added that Bannon was not being replaced, only that Cowen has been added to the team.