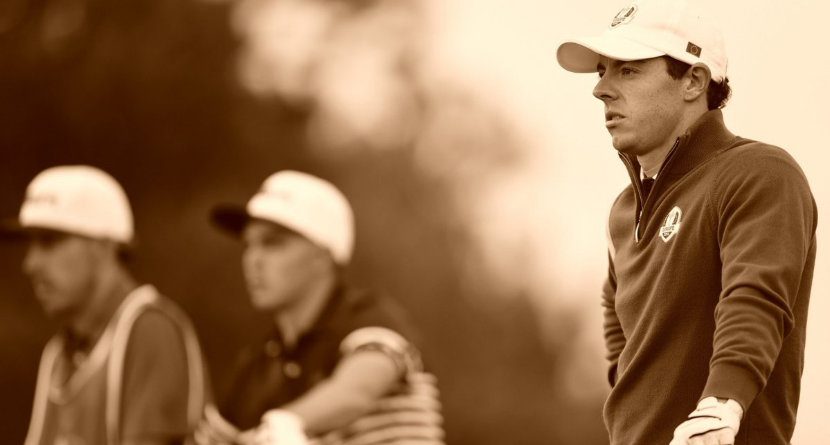 Rory McIlroy has been on the shelf with a rib injury since January, but that hasn’t stopped him from partaking in various interviews when asked. The four-time major winner has always been one to speak his mind when he’s in the press center, but when he’s not at the office, he tends to open up even more. Recently, Sports Illustrated Senior Writer Michael Bamberger caught up with McIlroy for a unique free-flowing email interview over the course of five days. Here’s a look at some of the highlights:

How has Tiger’s immense life, his on-course and off-course life, shaped your own?

I didn’t really know Tiger until 2012. I had spent time in his company and played with him before that, but I feel like I started getting to know the “real” Tiger when it became likely I was going to sign an endorsement deal with Nike.

There’s a lot I can learn from Tiger, whether it be on the course or off it. He lived and still lives in a goldfish bowl, and I think he’s managed that part of his life very well for the most part. That’s one of the tough things about this generation and social media culture. Everyone knows where you are or what you’re doing every single day of the year. Gone are the days you can go to a bar and not get photographed or mentioned on Twitter/Facebook, etc. And that goes beyond athletes and celebrities. Privacy is a very uncommon commodity for most people these days. I can see why Tiger longs for it so much.

Enjoyed this little back and forth with one of my favourite golf writers over the past few days. Take a look if you have time https://t.co/L2zjMC1MjG

What catches your eye in these two photographs [Hogan’s 1-iron at Merion and Tiger’s drive on the 72nd hole of the 2001 Masters]? Do these photos trigger any emotion in you? Do you have a favorite golf photograph? What feelings does it engender for you?

The thing about the famous Hogan at Merion photo for me is that it’s timeless. With that follow-through you could put him in modern clothes and it could look closer to this century. Obviously it was an iconic golf shot that has remained in golfing lore for over 60 years. You can’t say that about too many single golf shots. The Tiger photo on his way to winning the “Tiger slam” in 2001 just looks like a man in complete control of his world. I’ve always liked photos like these two photos because I think they depict very well the solitary pursuit golf sometimes is. This is one of my favourite golf photos for no other reason than the fact they look so f—ing cool!! Since turning pro, what new person in your life has made the greatest impact in your off-course life?

The greatest impact made on my off-course life has definitely been Erica. She has made me realise the person I want to be away from the golf course, which in turn I feel has made me better on it. The only way I can describe it is if golf were to disappear tomorrow, I don’t think I’d miss it as much as I would have a few years ago. I felt I needed golf to be complete as a person, as it’s been a part of my life since I was born. I don’t feel like that anymore.

You can read the complete interview here. We highly recommend it.