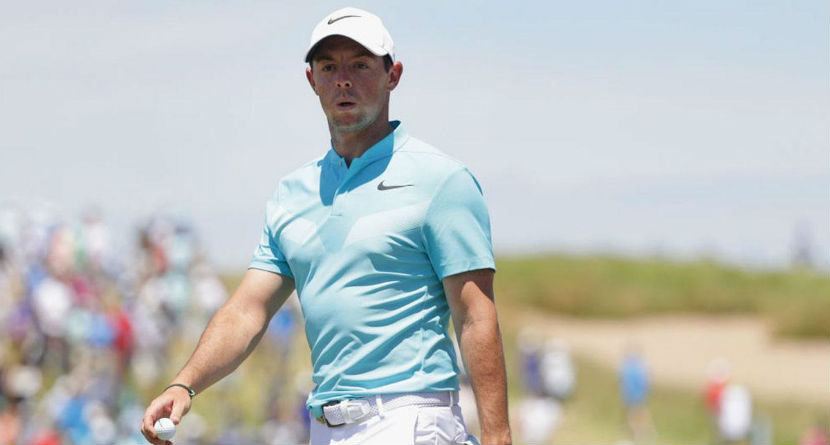 “Rory McIlroy spends too much time in the gym, ” they said. Actually, that couldn’t be further from the truth according to, Rory McIlroy. In fact, he’ll even tell you. On Wednesday during his press conference at the Travelers Championship, the four-time major winner discussed a variety of topics while setting the record straight about his 2017 gym regiment.

“Honestly, I haven’t lifted a weight all year, and it’s tough for me to come out and sort of say I don’t,” McIlroy said at the Travelers Championship, according to a Golf Digest. As reported, the 28-year-old has been battling a nagging rib injury all of 2017.

“But I literally have — the most I’ve lifted in the gym is 15 pounds this year because of my injury,” he said. “I’m nowhere near as strong as I used to be. I’m not. But I don’t need to be. I feel like physically if I’m stable and I’m strong in the right areas, I’m okay.

“So at least I can’t be criticized for that this year.”

Rors! That’s almost colder than his driver was at Erin Hills. He then went on to talk about the modernization of the game and the fact the people, especially Johnny Miller, quite frankly need to get over it.

“You feel like golf is a nostalgic game, so people are very — it wasn’t like it used to be,” said McIlroy. “But there is this new way of coming through that you need to modernize golf. There are some people that are sort of stuck in the era that they played and some people that want to move on from that.”

McIlroy continued, “Even what Justin Thomas did last week shooting 63, everyone compares it to something somebody did in the ’70s. It’s like why do we have to do that? Why can’t we just see it as what it is, an unbelievable score. Nine under, the lowest score ever shot in the U.S. Open, and leave it at that. Not have to compare it back in the day when people think golf was better, not better, whatever.”

Aren’t Rory pressers fun? The Travelers Championship kicks off today at TPC River Highlands in Cromwell, Connecticut with a stacked field (thanks to a new PGA Tour rule) including Jordan Spieth, Jason Day, Bubba Watson, and of course, McIlroy.