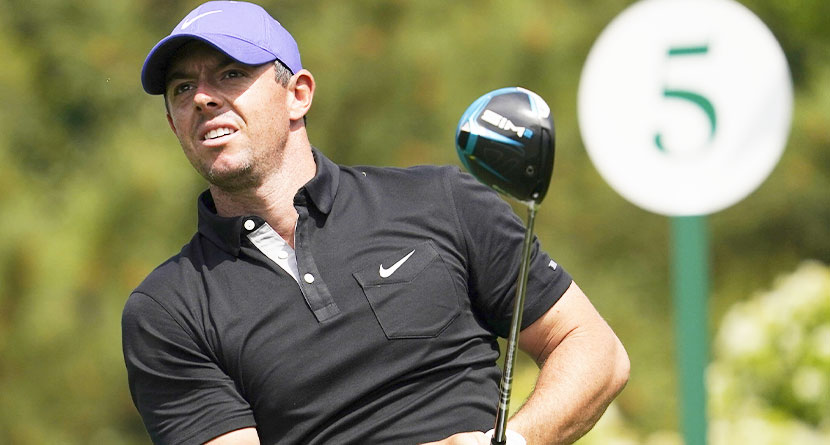 One of the most outspoken original detractors to the Premier Golf League — now the Golf Super League — was Rory McIlroy and following the news reports from Tuesday of offer contracts being sent out, McIlroy’s position remained the same.

According to reports, McIlroy was not among those to receive up-front contracts from the Saudi-backed splinter Tour and asked about it on Wednesday at the Wells Fargo Championship, McIlroy reiterated his position with some commentary attached.

“I’m very much against it. I don’t see why anyone would be for it,” McIlroy said. “You go back to what happened last week in Europe with the European Super League in football. People can see it for what it is, which is a money grab, which is fine if that’s what you’re playing golf for is to make as much money as possible.

“Totally fine, then go and do that if that’s what makes you happy.”

“Maybe the source of the money’s changed or the people that are in charge have changed, but nothing has happened,” McIlroy continued. “No sponsorship deals, no media deals, no players have signed up, no manufacturers have signed up. There’s been so many iterations at this point.

“I’m playing this game to try to cement my place in history and to win major championships and to win the biggest tournaments in the world. That’s why I’m playing this game. Golf has been very good to me obviously over the years by playing in Europe starting off, coming over to the PGA Tour and playing here. I honestly don’t think there’s a better structure in place in golf, and I don’t think there will be.”

On Tuesday, a wave of reports surfaced indicating that the likes of Dustin Johnson, Phil Mickelson, Adam Scott, Brooks Koepka, Bryson DeChambeau, Rickie Fowler and Justin Rose were sent offer contracts by the former Premier Golf League — now operating under the moniker Super Golf League — to the tune of $30-$50 million per player.

A significant push was made for Mickelson, according to Corrigan, who “has purportedly been offered $100m as the de facto head of the rebels.”

Let's just say Rory is less than thrilled with the idea of a Golf Super League 😬 pic.twitter.com/fWPIqflCWu

“According to sources who heard the speech, Monahan outlined for his players, many of whom are millionaires many times over, the benefits of remaining as Tour members,” Alex Miceli of The Morning Read reported. “He reiterated his message from last year, when the Premier Golf League made an ill-fated attempt to raid the Tour of many of its marquee players: Any defection will result in immediate suspension and likely permanent expulsion from the PGA Tour.”

McIlroy had no problem with the possibility of suspension or even expulsion.

“You have to protect your product, right?” McIlroy said. “It’s a competitive threat. And Jay took us through that last night. It’s in the bylaws that were written by the members.