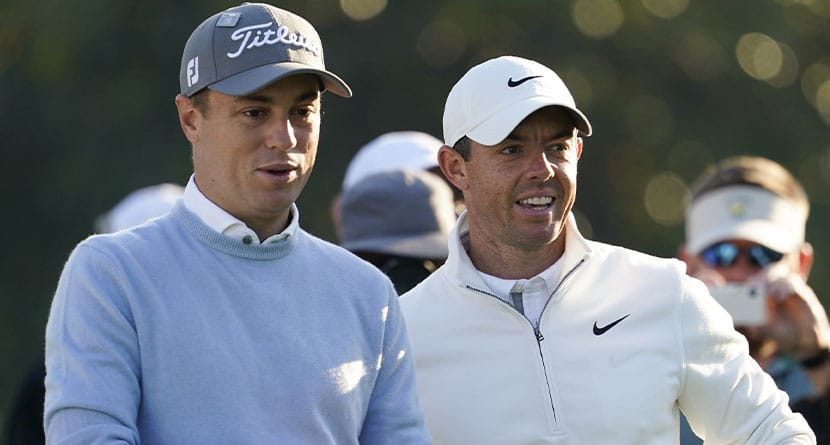 One of the things that people love about Rory McIlroy is that he’s thoughtful and candid during his press conferences, which tends to cause those meetings with the media to run a little longer than some of his peers.

That was the case on Tuesday at the PGA Championship, and with a packed lineup of top players waiting to meet with the press, the end result was Justin Thomas stepping into the back of the press center as McIlroy was wrapping up.

Noticing Thomas in the back of the room, McIlroy was lobbed a softball question about the importance of winning his second major at Kiawah Island’s Ocean Course, site of this week’s 2021 PGA Championship, and he took advantage of the situation to poke a little fun at his friend in the audience.

“Yeah, it was huge,” McIlroy said earnestly before locking eyes with Thomas and delivering the second part of his answer. “A lot of guys have won one major, but it’s a big hurdle to get to the second. It was good to get that monkey off my back, especially here and playing so well. It was a big deal.

“I definitely didn’t want to be stuck on one for a long time, so happy to get that second.”

Waiting for Thomas to approach the microphone, McIlroy extended his arms and embraced the one-time major champion.

As Thomas began his presser, he gave his general thoughts on the course and answered a question about his win at The Players Championship two months prior before the Rory moment came up.

“An open mic if you want a rebuttal to Rory,” a member of the media invited Thomas.

“I can’t really say too much other than it’s great to see him win (two weeks ago at the Wells Fargo Championship). I know it’s been a really long time for him, so I’m glad to see it,” Thomas said, giving about as much return fire as he was willing to. “At the same time, I really don’t want to egg him on because usually when he wins he likes to reel some off, and with a lot of big tournaments coming up I don’t really want to poke the bear.”

We’ll give this round to McIlroy.