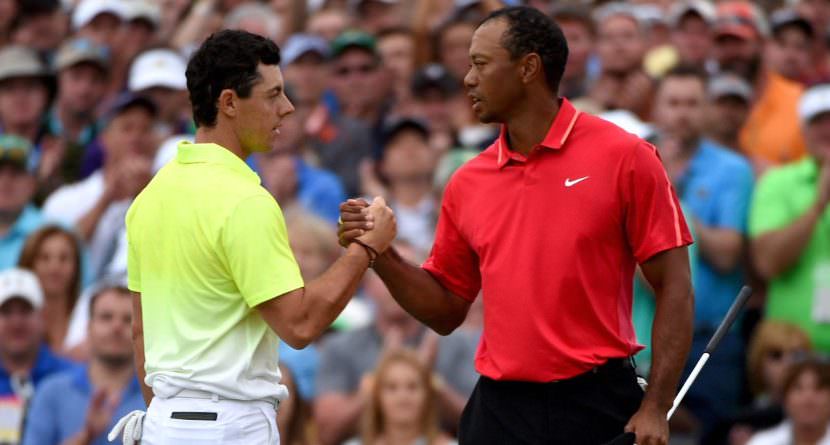 Rory McIlroy has been on the shelf with a rib injury recently, but that didn’t stop him from swinging by the No Laying Up Podcast for the second time. When asked if he watches golf when he’s not playing, he was quite candid about the fact he was just as interested to see Tiger’s return last week at Torrey Pines as everybody else.

In fact, he randomly woke up at 2:30 a.m. in Dubai, which happened to be the same time Tiger was teeing off.

“I was like, ‘Maybe I’ll stay up and watch a few holes,’” McIlroy said, according to the No Laying Up Podcast. “So I actually stayed up and watched most of it through the night. … It was Tiger’s first week back in a while and I was sort of intrigued to see how it was, just like everyone else, so I got up in the middle of the night to watch that.”

Even though Tiger missed the cut, it turns out McIlroy was impressed with what he saw. While everybody and their mother has an opinion on Tiger’s “new, old, whatever” swing, we should probably listen to Rory on this one.

“If you look at his backswing, where he’s taking the club away, where he’s putting the club at the top of the swing, it’s really good,” McIlroy said. “It’s so on plane. And if he can just get his lower body to work a little bit better through the ball, he’s right there. He’s so close. He’s closer than people think, I can assure you that.”

NLU Podcast, Episode 63: @McIlroyRory is back, talking injury, how much golf he watches, and how he celebrates wins: https://t.co/5WtCiONAU5

He then shared some thoughts on the 14-time major winner. If anybody can speak the truth about the person they’ve looked up to for so many years, it’s Rory.

“He’s won 14 majors, he’s won (79) times on the PGA Tour, he’s won over 100 times worldwide. That is not a failure,” McIlroy said. “But unfortunately, people are going to see his career as a failure because he didn’t achieve what he set out to achieve, and that’s ludicrous. Absolutely ludicrous.

“He played the best golf of anyone in the world, ever, for like a 10-year stretch. It was golf that no one had seen before. It brought so many people to the sport, and it ignited a generation of golfers that you see now coming through…so many guys that were just inspired by what he did on the golf course. He transcended the game of golf, and he is nothing but a success and a credit to the game of golf.”

“I would love if he would just give it one last run … because I’d love to compete against him down the stretch of a major.”

Rory and Tiger dueling down the stretch of a major Sunday? Don’t tease us.