Rory On Tiger: I Felt Sorry For Him 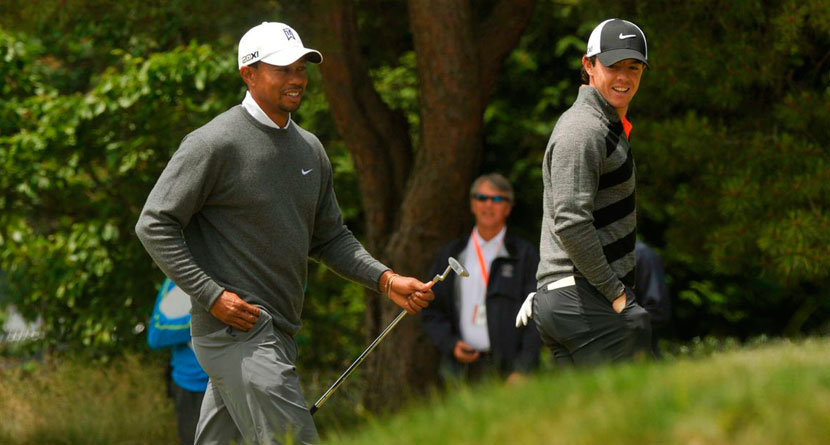 Rory McIlroy is planning to return to the PGA Tour next week at the World Golf Championships Mexico Championship after battling a rib injury that sidelined him for the past month. However, in the downtime while McIlroy was unable to pick up a club, the Northern Irishman may have found his calling after golf: an analyst.

McIlroy did a number of wide-ranging interviews in which the four-time major champion was lauded for his candid responses. The latest in that line of interviews came on Friday with The Guardian in which McIlroy dished on his game, his future, his thoughts on the current political climate and, of course, his childhood idol, Tiger Woods.

Rory McIlroy: “I never thought I would say this but I felt sorry for [Tiger Woods]” – https://t.co/6tlu0GmGf0 pic.twitter.com/t86Bc4s3DC

The most interesting tidbit to come out of the interview was McIlroy’s feelings towards Woods as he watches one of his heroes languish with a body that has betrayed him.

“I never thought I would say this but I felt sorry for him,” says McIlroy. “I just felt bad for the guy that his body won’t allow him to do what he wants to do. I can’t imagine anything so debilitating where you can’t even stand up to do a press conference.

“Tiger was a child star, he was used to being out there winning golf tournaments since he was 10. I know that’s not what he values his life around but it must be hard to still want to do that but have it taken away because you can’t physically get to where you want to be. Obviously there is a physical battle there but there has to be a mental struggle as well.

“I’m glad that he has other things in his life. He has his kids and is so committed to them. If he didn’t have that it would be so hard. He is still young, he has another half of his life to live. Golf is minuscule compared to watching your kids grow up. That’s where my priority would be now.

“Playing tournament golf would be a bonus and awesome but life is more important than golf, which is what people have to remember when talking about Tiger Woods. Everyone sees him as a golfer, not a person. Tiger doesn’t owe anyone in the game. He has nothing to prove to anyone. I just hope he gets healthy and happy.”