McIlroy Upsets Koepka For PGA Tour Player Of The Year 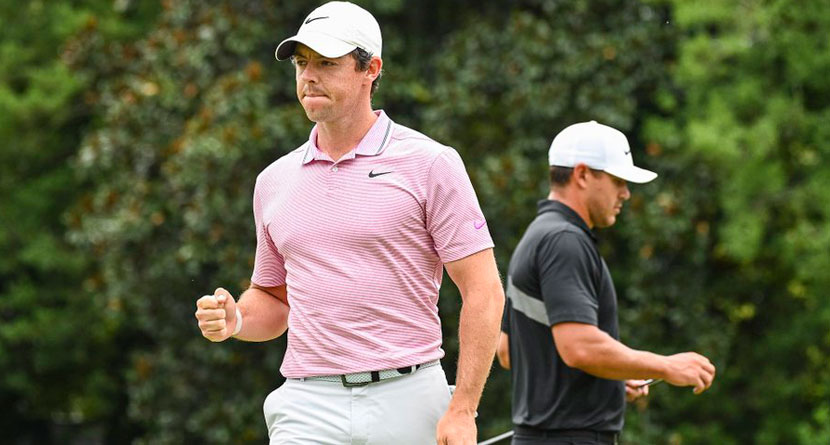 Golf fans got their answer on Wednesday when Rory McIlroy was surprised by Jack Nicklaus and PGA Tour Commissioner Jay Monahan at The Bear’s Club in Jupiter, Florida and presented with the PGA Tour Player of the Year award.

In a two-minute video shared by Nicklaus on social media, he and McIlroy were enjoying a conversation about Nicklaus’ recent Sycamore Hills National Pro-Scratch Invitational Legends Division victory when staff members began bringing out trophies that McIlroy had accrued over the course of the season.

With the Players Championship trophy, the Canadian Open trophy, the FedEx Cup trophy and the Byron Nelson Award trophy all on the table, Nicklaus told McIlroy that he now had three Jack Nicklaus trophies for winning the 2019 PGA Tour Player of the Year award.

This might have been some of my better acting! Don’t think I’ll getan Oscar or Emmy anytime soon, but it was fun to give a VERY surprised @McIlroyRory his 3rd Nicklaus Award as @PGATOUR Player of the Year!
Congrats Rory! And sorry for ruining our lunch date at The Bear’s Club! ? pic.twitter.com/HCqRyNqM7N

While Nicklaus called the presentation some of his better acting, McIlroy appears to figure out something is afoot as soon as the trophies started to come out. Once he was told he was voted as POY, he couldn’t believe it.

“I’ve got goosebumps,” he said, seemingly searching for words. “Wow. That’s completely taken me by surprise. I’m a little surprised. I felt like I had a chance to win it, but I didn’t know if guys would have thought because of Brooks (Koepka) and just winning that major was going to be the difference-maker.”

McIlroy’s latest accolade, which is voted upon by the PGA Tour membership, beat out Brooks Koepka, Matt Kuchar and Xander Schauffele.

“On behalf of the PGA Tour, my congratulations to Rory McIlroy on being voted the 2019 PGA Tour Player of the Year by the Tour’s membership,” PGA Tour Commissioner Jay Monahan said in a statement. “While there are a number of honors one can receive in this game, PGA Tour Player of the Year has to be among the most satisfying as it comes directly from his peers. Rory’s season was a model of consistency punctuated by milestone victories and ultimately the FedExCup in Atlanta.”

McIlroy’s concern about Koepka’s major victory at the PGA Championship as well as his top-5 finishes in the other three were enough to sway voters away from McIlroy’s own strong season was well-founded and echoed by many in the golf media.

Not McIlroy’s fault, of course, and he did enjoy a fine 2019. But it is ridiculous that the PGA Tour players voted for @McIlroyRory over @BKoepka as their Player of the Year. McIlroy would swap his season with Koepka’s in a heartbeat. Shouldn’t be a popularity contest

However, there’s no debating whether or not McIlroy had a successful year himself.

McIlroy’s accolades were many, via the PGA Tour: “(He) won the FedEx Cup for the second time (2016, 2019), becoming just the second player to win the season-long race multiple times (Tiger Woods), and the first player to win THE Players Championship and the FedEx Cup in the same season. With three wins on the season (The Players, RBC Canadian Open, Tour Championship), McIlroy matched Brooks Koepka for the most on Tour, and marked the third time he collected three or more victories in a single season. McIlroy also won the Byron Nelson Award for Adjusted Scoring Average (69.057) for the third time in his career and led the PGA Tour in Top-10s (14) and Strokes Gained: Total (2.551).”

As for Koepka, the slight could be another motivating factor for the world’s top-ranked player, but in the meantime, he was gracious when asked about McIlroy winning the award over him.

Just touched base with @BKoepka and he was very gracious, saying “Rory had a great year, congrats to him.”