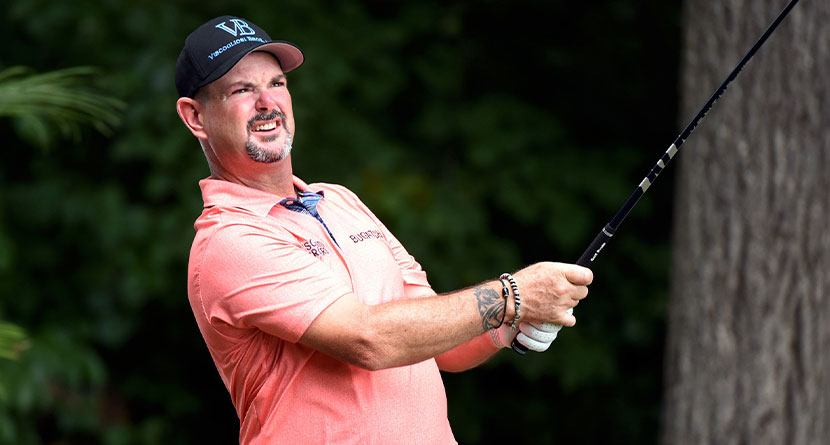 The Rules of Golf can be cruel sometimes as Rory Sabbatini found out this past week at the PGA Tour’s RSM Classic at the Sea Island Resort.

The reigning Olympic silver medalist shot a 4-under par 68 on Thursday at the Plantation Course, one of two resort courses used for the event, which included five birdies in his last six holes to finish the round.

Afterward, he alerted a rules official that he noticed a couple of Trackman stickers mistakenly remained on the face of his fairway wood after an equipment testing session earlier in the week. The small metallic stickers are put on the club to aid the launch monitor in accurately recording clubhead speed and serve no beneficial purpose to the club.

However, according to Rule 4.1, his club was deemed non-conforming due to the “non-conforming external attachments,” according to John Munch, the Tour’s senior tournament director equipment standards, which resulted in Sabbatini being disqualified.

Rory Sabbatini has been disqualified from the RSM Classic for violating Rule 4.1, having a non-conforming external attachment to the face of his club. According to Tour official there was a sticker attached to his club face that is not allowed under the Rules of Golf.

“There are stickers, reflective stickers. [They are] tiny,” Munch told GolfChannel.com’s Rex Hoggard. “The players use them to track clubhead speed when they practice and he just didn’t take them off.”

The kicker is that Sabbatini used the club in competition, on the very first hole, which sealed his fate. Had Sabbatinin noticed the stickers and opted to not use the club, he would have been well within the Rules of carrying, but not using a non-conforming club. However, since he struck a shot with the club in question, he was disqualified.

Back in 2017, Ben Crane received two four-stroke penalties for the same infraction under a previous iteration of the Rules of Golf at the then-Web.com Tour’s Albertsons Boise Open.

Crane had stickers on both his driver and 6-iron, which resulted in separate penalties for non-conforming clubs. The following day, Crane revealed that he became aware of the 6-iron’s sticker when he noticed the driver sticker a few holes earlier. Since he did not take the club out of play at that time, the result of the multiple infractions and failure to disclose the non-confirming club, transformed the 8-stroke penalty into a disqualification.

Thankfully, the Rules have been parred down since Crane’s 2017 run-in, but even the more relaxed rules weren’t enough to save Sabbatini from playing his own non-conforming club.