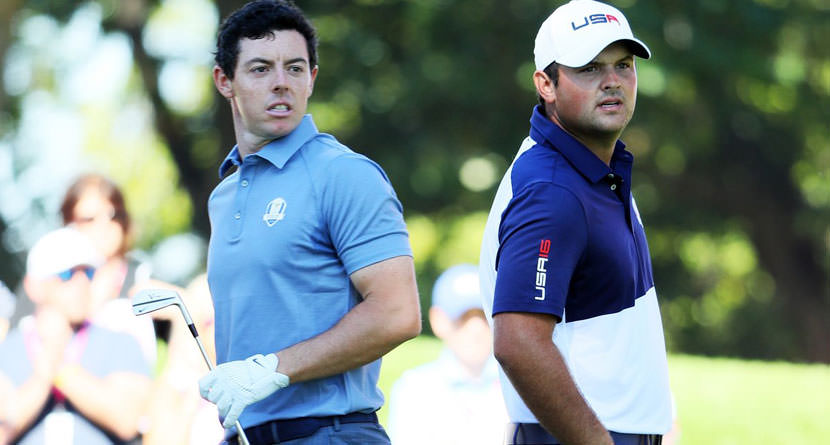 It was “Moving Day” at the Masters on Saturday, and Rory McIlroy made a big move towards securing the green jacket and the career grand slam.

The only thing in his way is an indomitable Patrick Reed, who held off all comers and sits ahead by three strokes at the Masters after 54 holes.

Reed leads at 14-under par, with only McIlroy seemingly up for the challenge at 11-under in what is shaping up as an epic two-man duel for the green jacket. The key figures aren’t falling into the trap of a match play round for the jacket, however.

“There’s a lot more players in this tournament than just Patrick and I,” McIlroy said, per the Associated Press. “It won’t be quite as intense (as the Ryder Cup in 2016), but we’ll still be feeling it. Patrick is going for his first (major), and I’m going for… something else.”

The pair will play in the final group teeing off at 2:40 p.m. at Augusta National.

McIlroy and Reed are no strangers to each other in big moments. It was just 18 months ago at the Ryder Cup that Reed and McIlroy played an epic match at Hazeltine. Reed defeated McIlroy 1-up in a head-to-head matchup that featured some of the greatest shot-making in Ryder Cup history. Reed’s victory helped the U.S. win the Ryder Cup and put him on his way to golf stardom.

The fact the two will meet again months later as the final pairing at the Masters will only pour gasoline on their budding rivalry.

Reed, the leader after 36 holes, showed he was up to the task of being the hunted, firing a 67 as he electrified the crowd with eagles at both No. 13 and No. 15. He continues to tear up the par-5s. Reed is playing the par-5s at Augusta at an incredible 13-under par after 54 holes.

.@PReedGolf extends his lead to five after recording his second eagle of the day on No. 15. #themasters pic.twitter.com/U0xRtG52q7

Reed led by five strokes after his eagle on 15 but dropped a shot back missing a short putt on 16 before finishing with a pair of pars.

Reed missed the cut at the Masters last year but was one of the hottest players in the world late last season with a runner-up finish at the PGA Championship.

To get to the 54-hole lead, Reed had to withstand McIlroy making a charge on Saturday by tying for the low round of the tournament, a 65, that featured a 5-under par 31 on the front nine.

McIlroy began the day tied for fourth, five shots back of Reed and played a near-flawless round. He was tied at 10-under with Reed at the turn and did not bogey on the back side. Reed had two eagles and a birdie before his bogey at 16.

McIlroy capitalized on the opportunity finishing up with a birdie at the 18th, to put him three shots off the pace.

Rickie Fowler also shot a 65 and sits alone in third place at 9-under par while Spaniard Jon Rahm moved into contention with a 65 that put him at 8-under par. No other players are within six shots of the lead heading into Sunday’s final round.

The Masters is known for its dramatic Sunday finishes and this one will be no different. Reed has a three-shot lead heading into the final 18 holes alongside his budding nemesis in McIlroy.