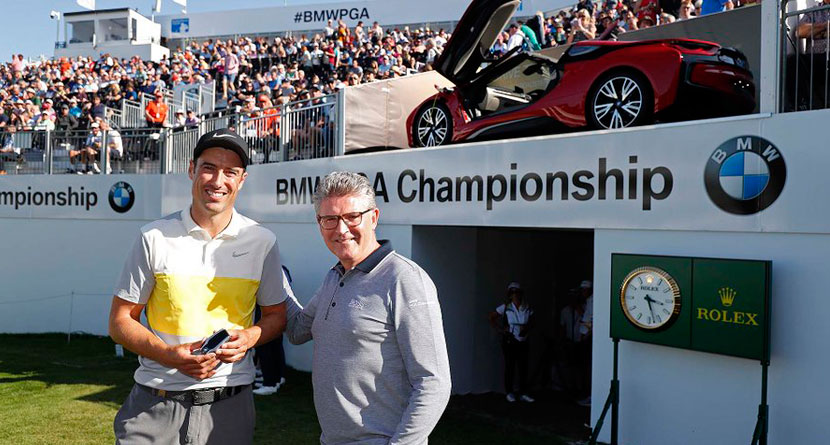 Five-time European Tour winner Ross Fisher was going along nicely on Saturday at the BMW PGA Championship at Wentworth when a good drive on the reachable par-5 18th hole left him a 4-iron into the green.

Fisher described the shot as “perfect” because it went in, and earned him the $165,000 BMW i8 Rosso Corsa that was sitting behind the green.

“(I was) just trying to hit it just a little bit right of the pin, and actually tugged it a little bit left,” Fisher said. “I wasn’t sure whether it was going to (go in) and crowd’s reaction told the rest of the story, the massive roars and cheers, know it’s gone in, and to win the BMW i8, still a bit shocking.”

Not a bad finish… pretty blown away by my new i8 – huge thanks to @bmw_uk – I'm off home to look at garage extensions for my new wheels ??? pic.twitter.com/OEbkXE07GN

As good as the shot was, Fisher’s bounce back from a 3-over par start made his Moving Day 66 all the more impressive. After a bogey-birdie start, Fisher dropped three shots over his next six holes to sit at 2-over par for the tournament and toward the bottom of the leaderboard of those who made the weekend.

“It was a nice way to finish, sign off,” Fisher said. “If only I could sort myself out on the front nine, it would be less stressful. What a roller coaster day. You know, pretty dreadful on the front nine and just caught fire and made four birdies in a row.

“Made a couple of nice birdies, lovely one on 15 and hit the second shot on 18. Slightly pulled it, looked away in disgust thinking it was too far left, and I heard the crowd’s reaction as obviously it made the carry and the big cheer, I just looked at (my caddie) and it was like, ‘oh, my God, it’s gone in,’ won the car. Still a bit shocked really. Just surreal. What a great day.”

Fisher enters Sunday’s final round eight shots back of Jon Rahm and Danny Willett, but he’s already done well for the week by producing one of the shots of the season as well as winning the new sportscar.