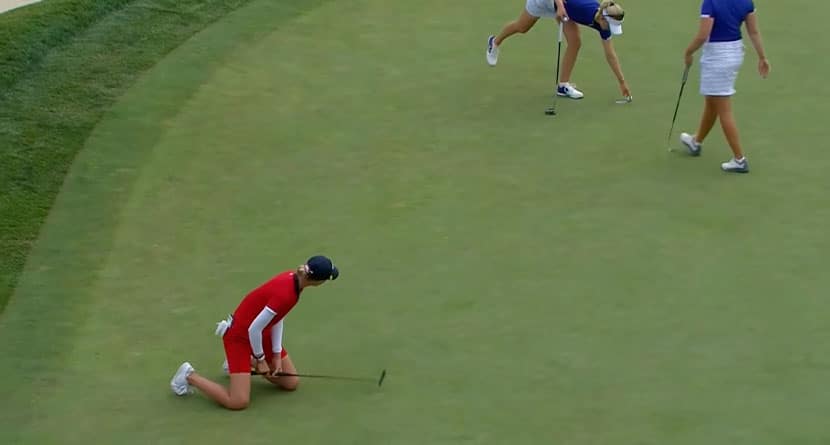 The return of professional international team golf required only a session and a half to take place before a rules controversy grabbed the headlines at the 17th playing of the Solheim Cup.

On Saturday afternoon, the four-ball competition between the United States and Europe found the Americans attempting to claw back from a 3½ – ½ deficit after a disappointing foursomes session at the Inverness Club in Toldeo, Ohio.

The first match of the afternoon pitted top-ranked Nelly Korda and Ally Ewing against Nanna Koerstz Madsen and Madelene Sagstrom. Tied through 12 holes, Korda found the putting surface in two shots on the par-5 13th hole, facing a 30-footer for eagle to win the hole.

The downhill right-to-left putt appeared to have eyes for the cup, but finished on the high side of the hole, sending Korda to her knees in disbelief. As Korda prepared to get up and retrieve her ball, Sagstrom came in from off the side of the green to concede the putt for birdie, picking Korda’s ball up and tossing it back to her.

Seemingly harmless, the Euros were approached by a walking rules official just off the green who informed Sagstrom that she had violated Rule 13.3 and as a result, Korda’s eagle putt was deemed to have been holed, winning the U.S. the hole and moving them to 1-up.

The Rule in question has to do with the 10-second rule of a ball overhanging the cup, which states “if any part of a player’s ball overhangs the lip of the hole, the player is allowed a reasonable time to reach the hole and ten more seconds to wait to see whether the ball will fall into the hole.”

A ruling has been made on Nelly’s putt.

The Chief Referee has determined that the ball WAS overhanging the hole, and her putt is considered holed per rule 13.3a. #SolheimCup pic.twitter.com/OIXmBrUjgo

In match play, 13.3b states that “if the opponent deliberately lifts or moves the player’s ball overhanging the hole before the waiting time has ended, the player’s ball is treated as holed with the previous stroke.”

The controversy stems from the differing interpretations of the ball’s position in relation to the hole, but the rules official, Missy Jones, made her opinion clear on social media in the aftermath.

According to Jones, she called the rules official in charge of observing on TV to confirm what she saw.

“I know what I saw but wanted confirmation and I got it,” Jones tweeted afterward. “Ruling was correct and made after confirmation. Very black-and-white rule.”

“Obviously, I wasn’t following the rules about leaving the ball for 10 seconds,” Sagstrom said afterward. “But I do believe in integrity and honor of the game of golf, and I would never pick up a putt that had a chance to go in.”

“We didn’t want it to happen this way,” Korda said. “It was picked up so fast. I fell to my knees and my ball was already in my hands. I honestly didn’t even get to see it.”

“We had no ill will,” Ewing said. “But the rules committee did reach that decision. It rattled both teams and we had to fight through it.”

Europe’s captain, Catriona Matthew, was on the scene and shared her thoughts afterward.

“It was a pretty fuzzy picture we were shown, and it was inclusive I would have said,” Matthew said. “I mean, a hundred percent believe Madelene did not, for one instance, think that ball had any chance of going in the hole when she picked it up, and I don’t honestly believe Nelly or Ally actually thought it was going to go in, either.”

The ruling ended up being the difference in the match with the U.S. winning 1-up.

The ruling continued to dominate the weekend, but thankfully when the dust settled on Monday evening, the point the U.S. earned in that match wasn’t a deciding factor as Europe won the Cup for the second time on American soil, 15-13.