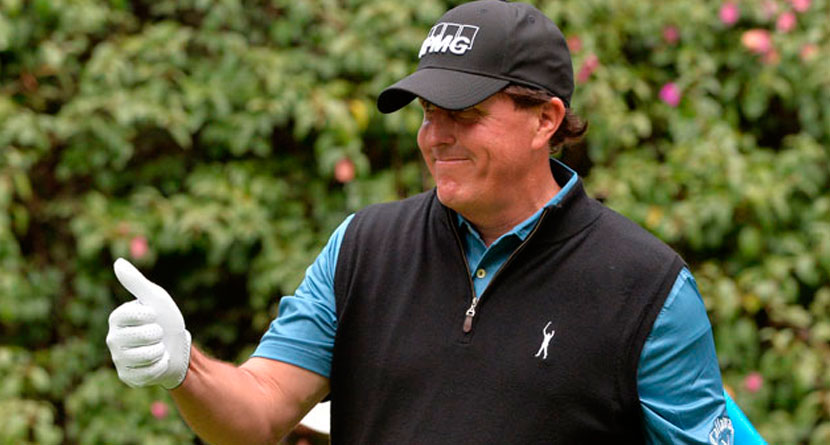 Phil Mickelson has rarely been accused of being boring, but his third round during the WGC-Mexico Championship at Club de Golf Chapultepec was off-the-charts crazy even for him. Mickelson would go on to hit just four fairways and eight greens en route to a 3-under par 68.

Of course with Mickelson, he didn’t just miss 10 fairways; he sprayed the ball all over Mexico City, resulting in a trio of unorthodox rulings, in particular, on the 10th, 11th and 12th holes.

The crowds are out in full force.

According to PGA Tour rules official Stephen Cox, who made the ruling, Mickelson’s ball was picked up by a fan and moved from the spot where it had come to rest.

After confirming with numerous sources in the crowd that Mickelson’s golf ball had been moved, Cox said the only thing he really had to determine was where it had been picked up, which was from a forward tee of the adjacent ninth hole.

Mickelson was allowed to drop where his golf ball originally was and he made an impressive par on the hole.

Under Rule 18-1, Mickelson was able to replace the ball. In this case, the spectator who moved the ball is defined as an “outside agency.”

If a ball at rest is moved by an outside agency, there is no penalty and the ball must be replaced.

Not giving the rules official very much time to get away, Mickelson required rulings on each of the next two holes. Luckily and improbably,  both rulings were for the same thing.

The tight, tree and brush-lined course requires some irrigation in the thick brush, and Mickelson’s next to drives on holes 11 and 12 both came impossibly close to two sprinkler heads inside some dense foliage.

In both instances, Mickelson dropped freely under Rule 24-2.

Mickelson would go on to finish in a tie for seventh, much of which can be attributed to knowing and using the rules to his advantage.