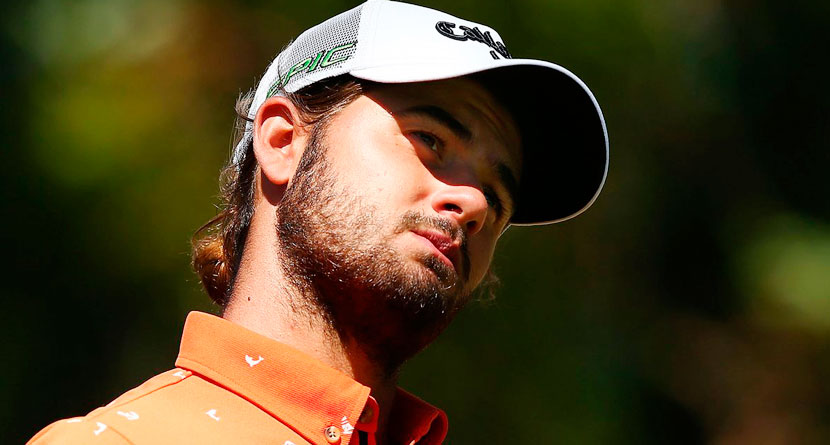 Australian amateur Curtis Luck is on the fast-track to professional golf following a very successful past 12 months. However, the 2016 U.S. Amateur and Asia-Pacific Amateur Champion got a taste of the big leagues last week at the Arnold Palmer Invitational.

The event was Luck’s first on the PGA Tour and will be his last before next month’s Masters, but he won’t have a finish to show for his Stateside debut because he was disqualified from the event following his second round for signing and incorrect scorecard.

Luck was unlikely to make the cut at Bay Hill after an opening-round 79. His struggles continued Friday and were compounded when he made a bogey on No. 9, his last hole of the day, but signed for a par.

“I was a bit frazzled. Obviously it had been a bad day,” Luck said. “I just signed it, handed it and I don’t know how I did it because it’s actually the first time I’ve ever been disqualified. I just obviously wasn’t in the right head space to sign a scorecard.”

Curtis Luck's DQ today at #APInv was for signing an incorrect scorecard; would've MC'd anyways. Focus is on Augusta now for #Masters debut

Signing an incorrect scorecard is a breach of the Rules of Golf under Rule 6-6d, which is pretty cut and dry.

There was an amendment made to this rule in the latest edition of the Rules of Golf that states if a player returns a score lower than he should have recorded because of a penalty he unknowingly incurred, there is no disqualification, simply an adjustment to the score. In Luck’s case, there was no such issue.

Things could be worse for the Aussie, though. His next start will come at Augusta National.