Rules: What Are Caddies Allowed to Do? 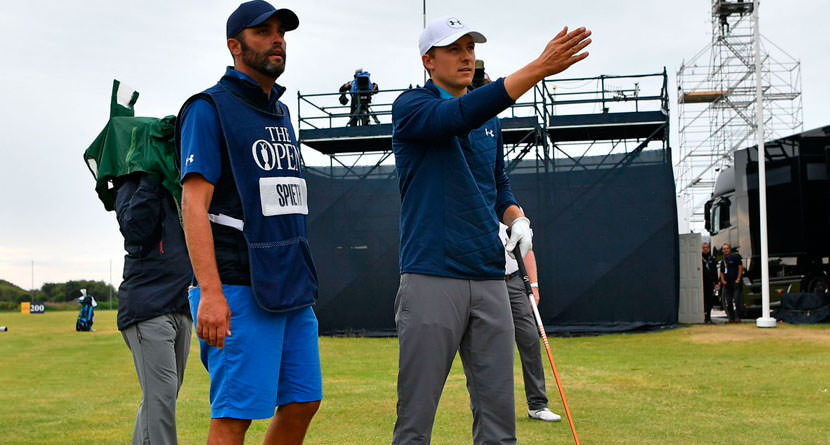 How would you react if Jordan Spieth pointed to you in the gallery near the first tee and asked you to be his caddie because Michael Greller, his regular caddie had just sprained his ankle on the way from the practice range?  No doubt, you would be absolutely ecstatic!  However, you might have to quickly temper your enthusiasm when Jordan, being well-versed in the Rules, advises you, “Don’t do anything unless I tell you to do it!’   At that point, you might be thinking, “What have I gotten myself into?”

Why Jordan’s immediate restriction on what you might do during the round?  Don’t take it personally because he simply wants to protect you, as his caddie, from causing him to incur an unnecessary penalty.  Under the Rules, there are only a few things that you can do as a caddie without the authority of your player.  Decision 6-4/10 [Acts Which Caddie May Perform] points out. “While the Rules do not expressly so state, the following are examples of acts which the caddie may perform for the player without the player’s authority:

So, how might you get Jordan penalized while caddying for him?  First off, look again at Item 5 of Decision 6-4/10.  You may mark the position of your player’s ball, but you had better not lift it unless Jordan has first authorized you to do so!  This is confirmed in Rule 20-1 [Lifting and Marking] which states, in part, “A ball to be lifted under the Rules may be lifted by the player, his partner or another person authorized by the player.”  If you were to lift Jordan’s ball without his authority after marking its position, Jordan would incur a one-stroke penalty pursuant to Rule 18-2 [Ball at Rest Moved by Player, Partner, Caddie or Equipment].  The ball would then have to be replaced by either you or Jordan per Rule 20-3 [Placing and Replacing].

If Jordan’s ball were to end up somewhere in an area of high grass, he would undoubtedly ask you to be extremely careful while assisting in the search for the ball, unless the area was an abnormal ground condition.  Even though Decision 6-4/10 points out that you may search for the player’s ball without his authority, Rule 12-1 [Seeing Ball; Searching for Ball] indicates that if you accidentally cause Jordan’s ball to move during the search, he would incur a one-stroke penalty under Rule 18-2.

If you were to find Jordan’s ball in a water hazard after a brief search, unless he tells you so, you must not assume that he will be taking relief from the hazard.  What you consider to be an impossible lie may be just fine for Jordan.  You’ve probably heard the promotional slogan for the PGA Tour, “These guys are good!”  Well, it’s more than just a slogan!!  If you were to pick up his ball in the hazard without his authority, then Jordan would incur a one-stroke penalty under Rule 18-2.

That is precisely what happened to Rhein Gibson during the 72nd hole of the Web.com Tour’s 2018 Bahamas Great Abaco Classic.  Gibson was hoping to birdie the hole and force a playoff.  Instead, he bogeyed the hole due, in part, to the one-stroke penalty that he incurred when his caddie picked up his ball in the lateral water hazard left of the green.  That little mistake cost Gibson $12,000 and the caddie his job!

Decision 26-1/9 [Caddie Lifts Ball in Water Hazard Without Player’s Authority] points out that the player may be penalized if his caddie lifts the player’s ball in a hazard without the authority of the player:

“There is no penalty under Rule 18-2 if there was no doubt or it was reasonable to assume from the player’s actions or statements that he would make his next stroke from outside the water hazard.

In such cases, any doubt should be resolved against the player.”

After the attending Rules Official overheard Gibson say, “Well, I guess I can’t play it now,” he had no choice but to resolve any doubt, as to whether or not Gibson had authorized his caddie to lift the ball, against the player.