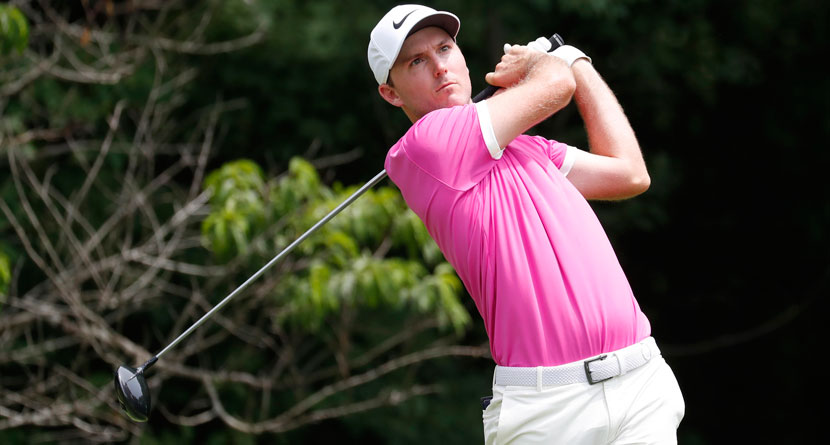 The Fall of crazy penalties continued this week at the Mayakoba Golf Classic in Mexico as three-time PGA Tour winner Russell Henley had a tournament-altering realization following the completion of his second round.

Following a second round of 2-under par 69, which coupled with his first-round 66 would have him on the brink of contention heading into the rain-condensed weekend at Mayakoba, Henley grabbed a few balls from his bag to sign for the standard bearers and other fans gathered around the scoring area.

When he reached into his bag and pulled out a prototype Titleist ProV1x — differentiated from than the usual 2017 version of the ball that he typically plays by a dash on the alignment aid on the ball – Henley knew he was in trouble.

“When I get done with a ball, my caddie will mark through it with a line so I don’t re-use them,” Henley told Golfweek.com’s Adam Schupak in a phone interview on Sunday. “He gave me two balls to sign and the Pro V1x part of it was facing up at me and I just looked at it and there’s a little dash beside the Pro V1x. I was like, ‘Hmm, that’s weird, is that what all my balls look like?’ I was caught off guard.”

The rules issue comes in with regard to the “one ball rule,” which stipulates that players may only use a specific brand and model of a ball throughout the course of their round. For example, players can change between different numbered golf balls so long as they are the same golf ball, but if you switch between a ProV1x and a regular ProV1, you’re in violation of the rule.

Russell Henley not playing at Mayakoba today because he violated the one ball rule leading to 8 penalty strokes https://t.co/m8Q4N6xpGD

Henley called over a rules official and explained his predicament. He wasn’t sure how the ball had gotten into his bag or if he had even used it, but scuff marks on the prototype ball made him think he had.

“I called PGA Tour rules official Brad Fabel over because something was wrong and I wanted to voice it,” Henley explained. “I told them the scenario that I probably played it, but I don’t know. It looked scuffed up and it had a line through it, but I couldn’t tell you what number ball I used yesterday on No. 4. I change balls every four or five holes, whenever I hit a wedge and there’s a scuff on it or something. I think I changed around No. 4, 9 or 10 and 14 or 15.”

Fabel and Slugger White,  the PGA Tour’s vice president of rules and competitions, called the USGA for clarification. In the end, Henley was hit with eight penalty strokes, two for each of the four holes he was deemed to have used the different ball.

“They told me that based on what we know and the high probability I used it, we’re going to take the average of the number of holes you typically used it, which is four,” Henley said. “Do I think eight shots is extreme in this situation? Absolutely.

“I think there should be a max of four. I hope eventually we can have some conversations and change the rule. I came from such an innocent place, you could call it a careless place, and given there was no intent I think it’s a pretty harsh rule. It can be debated both ways and I’m aware of that. It’s unfortunate when you’re playing well and in contention, like I was, to you’re missing the cut. It’s tough to swallow.”

I spoke to @russhenleygolf about the weird circumstances that cost him 8 penalty strokes and a missed cut @MayakobaGolf. “It’s tough to swallow,” he said. That and more here: https://t.co/u3gQP6UnU2

The eight strokes turned Henley’s 69 to a 77, and took him from the brink of contention to the check-in line at the airport following a missed cut.

Henley said he won’t let the bizarre run-in phase him. He’s trending in the right direction and will tee it up again this week at the RSM Classic at Sea Island.

“I felt like I was gaining momentum with my game,” Henley said. “I felt really confident about my chances; I don’t know about winning but I proved to myself that I can go low on Sunday at the John Deere last year. I had two rounds to get it done and I felt good about my game.”