Palmer Takes 6 Shots To Get Out Of Bunker, Makes 9 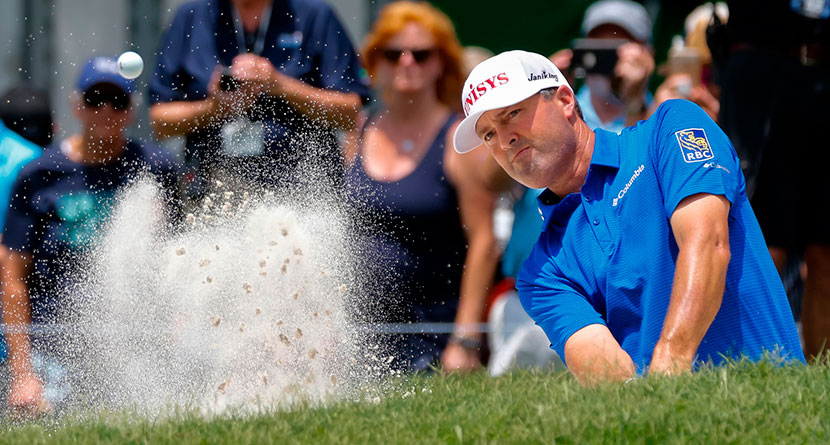 It seems like weekly on the PGA Tour, the pros show just how wide the skill gap is between them and us by how well they play their bunker shots.

However, on Saturday at the Genesis Invitational, Ryan Palmer proved that even a ridiculous amount of talent can still be humbled by this crazy game as the four-time PGA Tour winner required six shots — six! — to extricate himself from a greenside bunker on the par-3 14th hole at Riviera Country Club.

Palmer entered the weekend at Riv at 1-under par and one low round away from contention. But by the time he played his fifth hole of the weekend, he was in dead last among those who missed the cut and likely looking to crawl into one of the holes he made trying to escape the 14th hole’s greenside bunker.

The Texas native tugged his tee shot on the 193-yard hole into the left bunker. From there, Palmer can describe the rest, as told to GolfChannel.com.

“Fatted it up there. It stayed (near the lip). Somehow. Came down. Fatted it. Stayed, somehow. Tried to hit it each time,” he said. “Came down in a footprint, chopped it out and two-putted.

The sextuple bogey 9 led to a first-nine 45 that, along with his second-nine 36, led him to post a 10-over par 81 and one of the most colorful scorecards you’ll ever see from a Tour pro.

To Palmer’s credit, he played a solid round of golf on Sunday, shooting a 1-over par 72, and finished one shot ahead of Tiger Woods, who came in last place among those who made the cut.