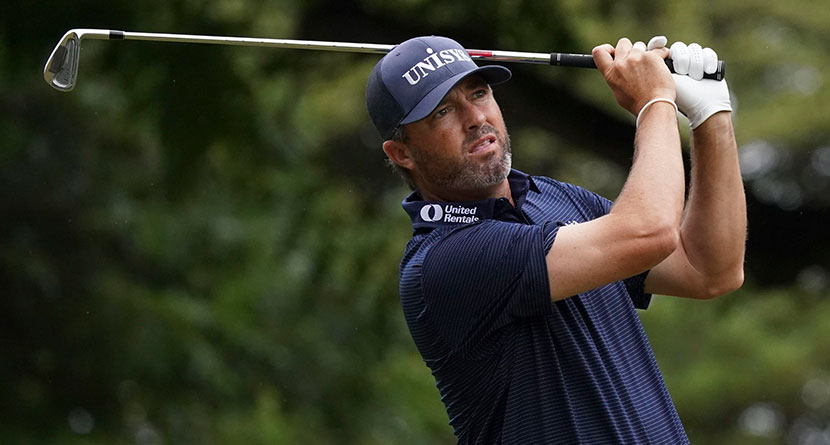 Ryan Palmer came to the 72nd hole of the Sony Open in Hawaii one shot back of leader Brendan Steele when he and his caddie, James Edmonson, made the call to hit a 3-wood from a fairway bunker on Waialae Country Club’s 18th hole.

The aggressive play was not rewarded as Palmer watched helplessly as his ball started to go right where grandstands, a jumbotron and out of bounds lurked.

The ball took an unlucky bounce off the top of the jumbotron and seemingly disappeared, all but ending Palmer’s chances to win the tournament.

Ryan Palmer was 1 back when he hit this shot.

The aggressive play led to a wild bounce.

He bogeyed to finish 2 back. pic.twitter.com/WXVCZfyxtf

“Yeah, I knew I was one back,” Palmer said after the round. “It’s a shot I hit every time. There is no doubt about it.”

The ricochet launched his ball out of bounds, meaning Palmer had to return to the previous spot and replay the shot under a penalty.

“I told (rules official Slugger White) driving up, I was trying to hit the left side of the cylinders holding up the scoreboard, not the right side,” Palmer joked after the round.

Ryan Palmer with the dreaded “back to where you just hit it OB” cart ride. Especially bad here because:

-just cost himself a chance at the tournament
-lost (at least)$250k
-extra-sheepish look to pissed-off Cam Smith and Brendan Steele
-had to go hit 3-wood out of a bunker AGAIN pic.twitter.com/zhzHz01uKU

Palmer again hit the fairway wood from the sand, this time coming up just short of the 18th green. He got up-and-down for a bogey 6, which dropped him t0 9-under par. Had Palmer laid up and made birdie, he would have been the third member of a playoff between himself, Steele and eventual champion Cameron Smith.

Even making a par would have been impactful, at least as far as money is concerned — the bogey that dropped him to 9-under par cost him about $178,000 — but Palmer doesn’t regret the decision.

Oh man what a week @SonyOpenHawaii !! We gave it our all til the end… And for all those questioning the last hole, I’ll do it again next week so deal with it. That’s golf. Ready for a week at home then off to @FarmersInsOpen !!

Palmer, who has career earnings over $27 million, will take next week off before teeing it up again at the Farmers Insurance Open in San Diego.