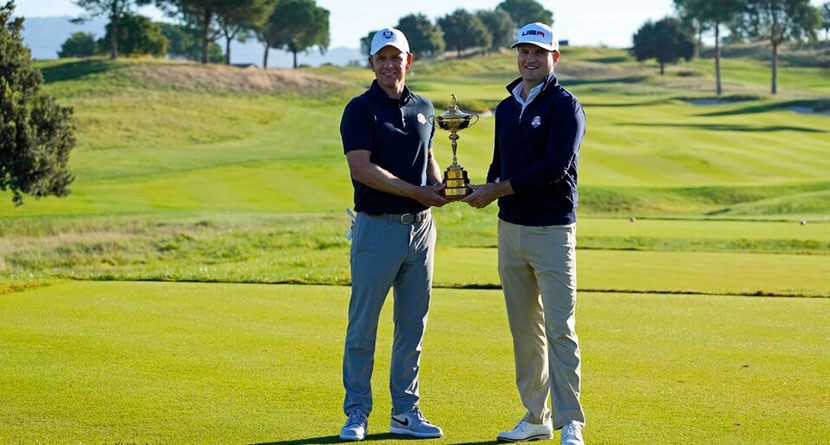 GUIDONIA MONTECELIO, Italy (AP) — The biggest team event in golf is coming to Italy and the Ryder Cup’s organizing committee is concerned that the locals might miss the party.

About 90% of the tickets sold so far for the 2023 contest between the United States and Europe at the Marco Simone club outside Rome have gone to foreigners, according to Gian Paolo Montali, a former coach of Italy’s national volleyball team who is the local organizing committee’s executive director.

“That surprised us a lot,” Montali said in a recent interview with The Associated Press. “On one hand I’m surprised. But on the other hand we’ve been doing everything we can to promote Italian products (abroad). And we’re not a country with a golfing profile.

“But what I’m afraid of is that the Italians will show up at the last minute and realize what’s going on. That’s the real concern. I tried to see if we could put aside some tickets for that last period but the organizational structure was already in place.”

The Ryder Cup is coming to Italy and organizers are concerned that the locals might miss the party:

About 90% of the tickets sold so far for the 2023 contest between the US and Europe at the Marco Simone club outside Rome have gone to foreignershttps://t.co/snJF5AlpOL

While Ryder Cup Europe would not disclose exact numbers, it did say that it’s the most season tickets ever sold for the event in Europe.

“I’m in charge of the Ryder Cup and I have friends asking me for tickets to whom I have to say, ‘No,’” Montali said.

A ballot is currently underway to sell general admission daily tickets — which comprise the majority of the tickets.

“We are delighted with the terrific response we have had,” Ryder Cup match director Edward Kitson said. “So far, we have had applications from people in 122 different countries, including strong interest from Italian fans. . .The ballot remains open until October 16, so there is still time for people to apply.”

Marco Simone will become the third venue in continental Europe to host the Ryder Cup after Valderrama in Spain (1997) and Le Golf National in France (2018).

Major champions Rory McIlroy and Matt Fitzpatrick were impressed by the challenges that the completely redesigned Marco Simone course presented when they played it in last month’s Italian Open.

“The course is defending itself well,” Montali said.

U.S. captain Zach Johnson and Europe counterpart Luke Donald are currently in Rome for the year-to-go festivities, which will include a photo shoot with the captains hitting shots into the Colosseum on Tuesday, followed by a private audience with Pope Francis on Wednesday.

Montali would like to arrange an audience with the pope during Ryder Cup week, too.

“But that won’t be easy with 24 players,” he said. “It’s one thing to arrange for two people — quite another for two dozen.”

Montali has been on the job for six years and if not for the coronavirus pandemic he would have been just about done by now.

That’s because this edition of the Ryder Cup was originally scheduled for the just-concluded weekend — before the 2020 edition in Whistling Straits, Wisconsin, was pushed back a year to 2021 and therefore moving the Marco Simone event to 2023.

Because of the European tour’s conflict with the Saudi-backed breakaway series LIV Golf, Montali has also had to endure a change in Europe’s captaincy from Henrik Stenson to Donald after Stenson joined LIV.

“We had already filmed a promotional video inside the colosseum with Stenson,” Montali said. “But these things happen in sports. I was previously the coach of Italy’s national (men’s) volleyball team and the general director of Juventus and Roma (soccer clubs). Coaches are fired from one day to the next.”

While lawsuits involving LIV players’ participation in PGA and European tour events are ongoing on both sides of the Atlantic and could also determine who can and who can’t participate in the Ryder Cup, Montali doesn’t want to entertain the thought that the conflict could result in another postponement for the event.

He is concerned, though, that many top golfers might not be able to compete at Marco Simone.

“I like to win against the best,” he said. “So it would be a shame for the show, and above all for golf.”

So how will visiting ticketholders staying in the center of Rome get out to Marco Simone each day?

The club is located just beyond the city’s ring road and requires a half-hour drive without traffic — but longer on congested weekdays.

“It’s all organized,” Montali said. “We’ll have specially dedicated metro and bus stops and there will be a ‘Ryder Lane’ on the roads approaching the course.”

Montali is hoping that Tiger Woods is a part of the U.S. team.

“Even if he’s just a vice captain, just seeing him walk around here would be something,” Montali said.

“That,” Montali said, “could be a problem for us.”