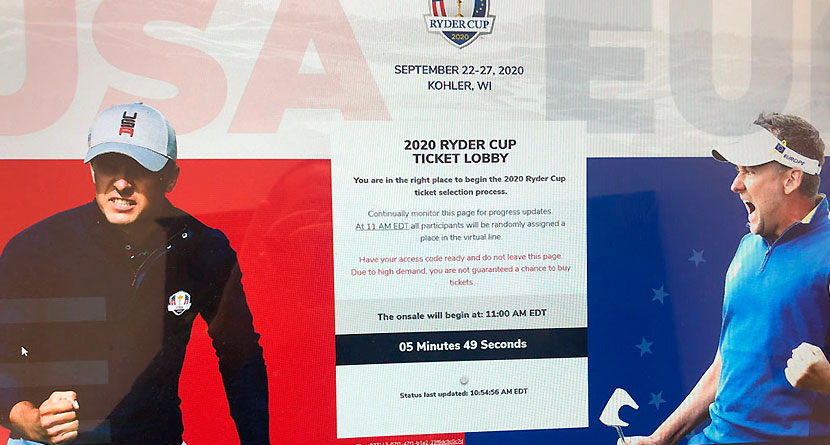 Many fans of the Ryder Cup were left with a sour taste in their mouths after Wednesday’s online ticketing lottery system sold out in less than 50 minutes.

Fans around the world began receiving emails last week that they had been selected in the ticket lottery, but unlike the ticketing process at the Masters, winning the Ryder Cup lottery only guaranteed potential attendees of the event to be held at Whistling Straits in Kohler, Wisconsin another opportunity to potentially purchase tickets.

The online lobby opened at 10 a.m. EST on Wednesday with tickets allowed to be purchased beginning at 11 a.m. EST. Based upon a “randomly assigned” place in a virtual line at 11, fans were greeted with an aggravating status bar that featured a small white figure slowing moving towards their opportunity to purchase tickets. However, for many, by the time that figure reached the end of the status bar, tickets were sold out.

Watching this thing crawl along is torture. pic.twitter.com/ffkqpMJkKM

This Ryder Cup Ticket Process was the biggest pain. Why email us saying you won the raffle then don’t even give us a chance to purchase tickets….. switch up the format so you don’t wait in the lobby for 3 hours #RyderCup2020 pic.twitter.com/TLlst1V9qQ

For their part, the demand for the tickets was “unprecedented,” according to a tweet from the United States Ryder Cup account.

Due to unprecedented demand for 2020 #RyderCup tickets, which quickly sold out today, some may have experienced challenges during the Random Selection Process. We appreciate everyone’s enthusiasm & excitement for the #RyderCup & apologize for any inconvenience.

“Due to unprecedented demand for 2020 #RyderCup tickets, which quickly sold out today, some may have experienced challenges during the Random Selection Process,” the tweet read. “We appreciate everyone’s enthusiasm & excitement for the #RyderCup & apologize for any inconvenience.”

As if it were any consolation for those who didn’t get their tickets through the lottery, some have popped up on the secondary market (naturally). Weekly grounds passes start at $1,500 and individual event days start at $400. The cheapest option appears to be buying practice round tickets for Tuesday, Wednesday or Thursday, which are going for as little as $70.