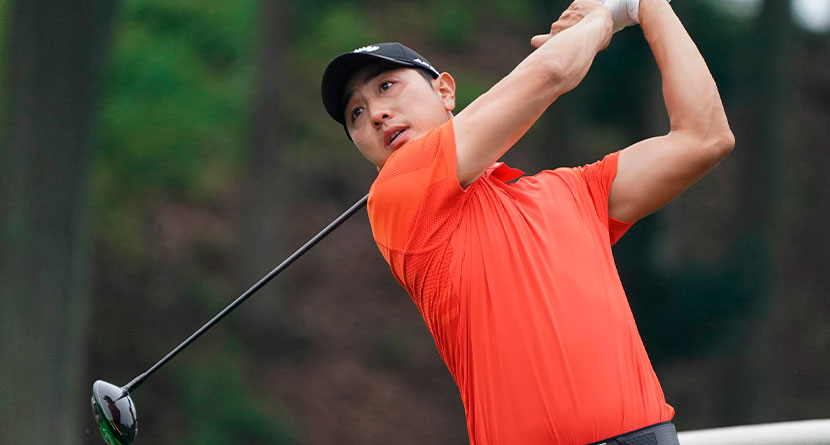 The constant rollercoaster of emotions a round of golf takes one on lends itself to describing shots as the best or worst that have ever been hit, but on Thursday at the 3M Open in Baile, Minnesota, two-time PGA Tour winner Sangmoon Bae entered a strong case for “best par of all time.”

Going out in 5-over par 40 on the front nine, Bae turned and made another bogey before rattling off back-to-back birdies to sit at 4-over par for the day.

Five consecutive pars brought him to the 599-yard par-5 18th, a hole that asks the players to take on a lake on the right side of the fairway if they’d like to have a go at the green in two.

Bae swung just three times on the hole, not once having the ball come to rest above the surface of the ground.

This is the greatest par in the history of golf. https://t.co/fXO9QNg9JK

Bae’s drive found a watery grave, and after a drop in the fairway, so did his third shot. Dropping once again from 250 yards away, he holed it for a ho-hum par.

Beings that Bae wasn’t in a featured group and the fact that the broadcasts are still operating with skeleton crews during the first two rounds due to the pandemic, there wasn’t video of Bae’s unlikely par.

However, using the Tour’s new TourCast 3D, you can get an idea of how the hole went down.

Adding further proof that Bae’s was the greatest par of all time — or at least in recent memory — the PGA Tour’s Mike McAllister dug up the longest hole-outs in the ShotLink era (since 2003), and Bae’s hole out is the longest by some 74 yards.

So step aside, Fred Couples, who holed out his third shot on the par-3 17th hole at TPC Sawgrass in 1999 for an improbable par; Bae’s 250-yard hole-out takes the cake as greatest par of all time.