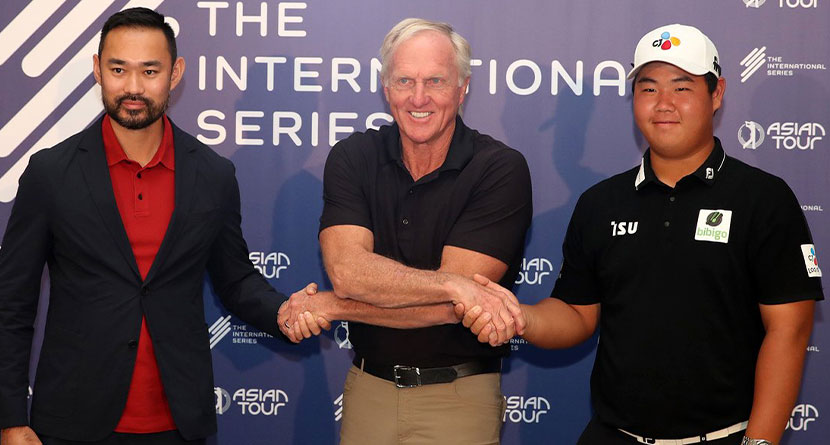 The wheels are officially in motion for the Saudi-backed Super Golf League under the auspices of the Asian Tour.

On Tuesday at the Saudi International, LIV Golf Investments CEO Greg Norman and Asian Tour commissioner Cho Minn Thant announced the 10-event International Series that would increase the Saudi’s investment in the Tour from $200 million over 10 years to $300 million.

The splashiest aspect of the announcement came in the form of a June 9-12 event at Centurion Golf Club in London, just minutes from DP World Tour headquarters. Norman hinted that events would be coming to the United States in short order as well.

The England event will boast a $2 million prize purse, which pales in comparison to purses on the PGA Tour (regularly in the $10 million range), but are on par with purses on DP World Tour (excluding elevated Rolex Series events).

Of course, the prize funds aren’t the big draw in the short-term; it will be the appearance fees that will garner most of the attention, acclaim and, as the Asian Tour and LIV Golf Investments hope, high-profile players.

“We are on the threshold of a new era for Asian golf,” Thant said. “The International Series is a new upper-tier of elite events, the likes of which the region has not seen before, that will mark the start of a phenomenal period of growth for the Asian Tour. It also signifies the beginning of our relationship with our new strategic partner LIV Golf Investments and its CEO Greg Norman.”

“We are setting the Asian Tour up as a powerful new force on the world golf stage,” Norman said. “In my 40 years as a professional golfer, I’ve seen many parts of the world that have benefited tremendously from golf and its growth and development. We now have the opportunity to do that in the Asia-Pacific region and the Middle East with this incredible investment platform.

“Everyone benefits – professional players, amateurs, grassroots golf, fans, economies, communities, stakeholders. I’ve never been so optimistic about the future of the sport.”

While Norman asserts that “everyone benefits,” you’d be hard-pressed to convince those running the PGA and DP World Tours of that. However, Norman was adamant that LIV Golf Investments wasn’t “looking for a fight,” but instead wants to be collaborators in the growth of the sport.

Then he made a pie analogy in an attempt to explain global professional golf and LIV Golf’s involvement.

“You’ve got to be able to give the ability to sit back and listen and understand the opportunities to sit side by side for the sport of golf. Simple as that. It’s all about the game.”

So, to summarize: the PIF made another significant investment into the Asian Tour, which will bring the Saudi-backed product into the backyards of the PGA and DP World Tours, but LIV Golf Investments are not here for a fight; they’re here to make a bigger pie. Or something.