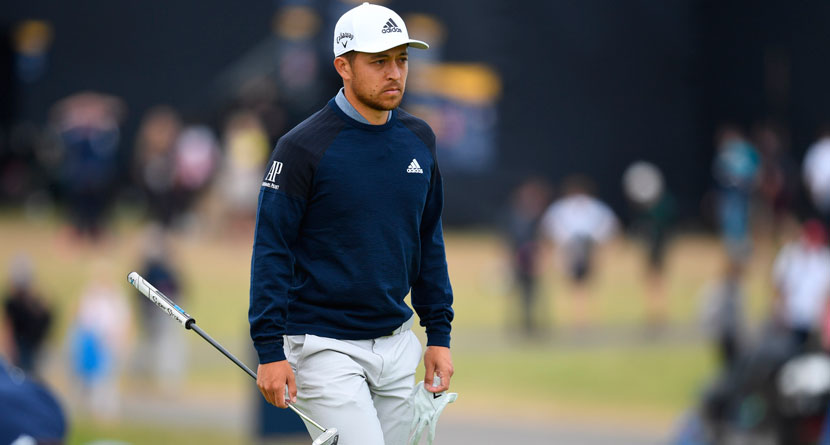 The revelation that Xander Schauffele’s Callaway driver failed a CT/COR test on Tuesday of Open Championship was leaked by the R&A, according to Schauffele, and the California native didn’t take kindly to having his integrity called into question.

Speaking to the media following a third-round 2-under par 69, the four-time PGA Tour winner said the R&A “pissed him off” by letting the news get out that his driver failed before revealing that he was called a cheater by a fellow competitor, albeit in a joking manner.

“This matter should be private. But the R&A didn’t do their job in keeping it private,” Schauffele said. “It is an unsettling topic. I’ve been called a cheater by my fellow opponents. It’s all joking, but when someone yells ‘cheater’ in front of 200 people, to me it’s not going to go down very well.”

Beginning at last year’s Open Championship at Carnoustie, the R&A began randomly testing the drivers of about a fifth of the championship field to see if the spring effect on the clubface was conforming. While there weren’t any publicly revealed failed tests in 2018, that wasn’t the case at Royal Portrush.

“The R&A, they pissed me off because they attempted to ruin my image by not keeping this matter private. This is me coming out and treating them the exact way they treated me. It was just handled unprofessionally. And it did tick me off, for sure.”

When asked by Golf Channel’s Todd Lewis if he believes the R&A intentionally released information that his driver failed, Schauffele said that he didn’t think they did as they had nothing to gain by doing so, but he stood by his claim that it was the governing body who “leaked” the information.

The R&A didn’t respond directly to Schauffele’s comments but said in a statement, “We always listen to feedback from players and have done so in this situation. We will continue to treat this as a private and confidential matter.”

Along with Titleist, Srixon and XXIO have confirmed their drivers passed. https://t.co/bOqDeTXHQW https://t.co/LjZVck6fvp

As for claims that both a PXG and a TaylorMade driver failed the conforming test, PXG’s founder and CEO, Dr. Bob Parsons, denied the claim to Jonathan Wall of Golf.com.

“We do make a hot driver,” Parsons said. “That said, the PXG driver that was selected for testing this time, tested right on the line.”

Schauffele enters the final round of the Open Championship 11 shots back of 54-hole leader Shane Lowry.