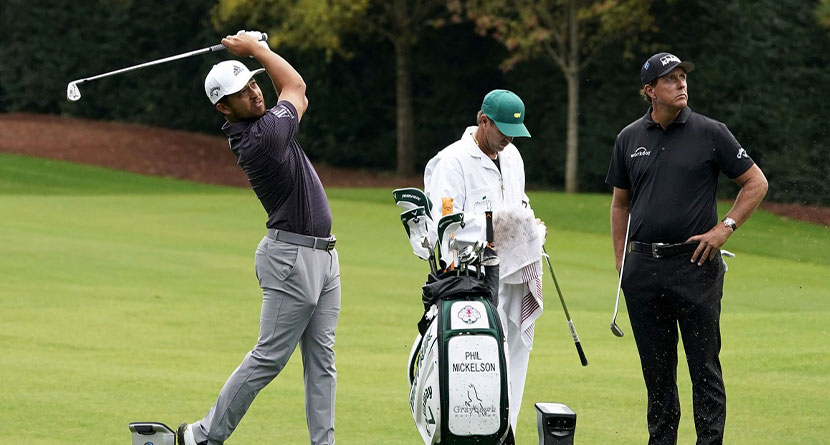 There are a lot of great gambling stories that come from the PGA Tour that start with “So, I was playing with Phil Mickelson…”

The story was a few weeks in the making as Mickelson referenced the money rounds he and Xander would play during quarantine last week at the Charles Schwab Classic. Asked about his belief in himself, Mickelson launched into a response that said his opportunity to play with the young stars of the PGA Tour had a big impact on his confidence.

“A big thing for me in getting things turned around has been the opportunity to play with a lot of good, young players, and so just prior to Innisbrook I had a chance to play with Rory McIlroy and Rickie Fowler at The Grove in Florida and I had a chance to play a lot of golf in the last year and a half with Charley Hoffman and Xander Schauffele in San Diego and that’s made a big difference for me,” Mickelson said.

Mickelson credited Schaufelle’s calm demeanor and course management skills as inspirational, something that set him apart and allowed him to be one of the top-10 players in the world at the time. Even more impressive, Mickelson said, was the way in which Schauffele would beat him.

“I remember a year ago almost to the day where I was playing a few rounds at the Farms with Xander, and we played a match and he went out and shot 64 and I’m like, ‘Wow, all right, you gave me a pretty good beating. Let’s do this again.’ So, a few days later went and played again and he shot 63. I’m like, ‘Wow, okay. Let me try one more time.’

“So we go out next time and he shoots 62 and on a 220-yard par-3, I had to press and hit one four feet and he makes a hole-in-one. I went back and talked to Amy and I’m like, ‘I don’t know how I’m going to beat this guy. He’s probably playing the best of any player in the world right now.'”

“If Phil lost, he’d wanna play another 18 holes”@XSchauffele and @PhilMickelson spent A LOT of time together on the course during quarantine. On the latest @golf_subpar, Xander takes you inside his battles and learning lessons with Lefty.

With a fresh Phil story brewing, the golf media was itching to talk to Schauffele this week at the Memorial Tournament, the No. 5 player in the world’s next start since Mickelson brought up his quarantine match prowess.

After a few questions about the course changes at Muirfield Village, his excitement for the U.S. Open in his hometown and some PGA Championship retrospectives, the Phil questions came fast and furious with Schauffele playing a bit of a humble role.

“We started playing a lot over during quarantine. We didn’t really have anything else to do, it was the only way for us to get out of the house,” he began. “So obviously the mood of the rounds were great just because we’re out and about versus being stuck indoors.

“I was playing really good golf. To be completely honest, Phil was playing probably some of the worst golf he’s played. Obviously, the course being narrow and sort of strategic didn’t really fit his eye. So I took full advantage of him not playing well and me playing really well during that time stretch.”

Pressed on his ace after Mickelson hit it to four feet, Schauffele added some color to Phil’s rather benign telling of it.

“He tried to quick-trigger it. He pressed,” Schauffele said. “And the walk back to the 16th tee is like 80 yards or a hundred yards and we were jawing each other on the 15th green. I won the hole, he pressed, and then he quickly went back to the tee to tee off and it’s one of the harder par-3s on the course. And he wasn’t supposed to hit first and of course, he hits first and hits it to four feet or so.

“I’m letting him know that I could make him re-hit, since it’s match play, but since he was getting his butt kicked, I figured I would let him hit it to four feet and not make him re-hit. But it was just funny. I wasn’t really a guy to make too many holes-in-one and I kind of pulled a 6-iron toward the water a little bit, fell right in line with the pin and then trickled in.

“There’s a little mound behind the tee box — and he just sat there looking down at the ground, shaking his head, he just didn’t really know what to do with himself. So I found that pretty entertaining.”

As for the stakes and what Phil lost over the course of those three rounds, Schauffele declined to give a specific amount saying, “That’s not for me to say. They’re much larger than most games, I can tell you that.”

However, thanks to some previous stories, we can safely assume that Phil was losing somewhere in the neighborhood of $2,500 per match.