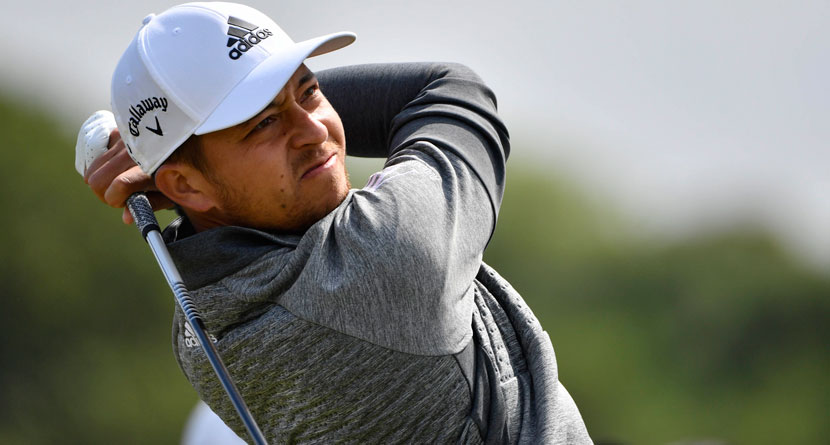 With the conversation surrounding advancing distances in the professional game intensifying seemingly with every passing week, the R&A took action beginning at last year’s Open Championship at Carnoustie by randomly testing the drivers of about a fifth of the championship field.

The governing body was specifically testing the drivers’ characteristic time (CT) and coefficient of restitution (COR), which measures the rebound off of a driver’s clubface using a spring-loaded pendulum.

While Tiger Woods was the most high-profile of the 30 players who had their drivers tested this week, the 15-time major champion’s TaylorMade M5 was deemed conforming. The same couldn’t be said for Xander Schauffele’s Epic Flash Sub Zero, which he confirmed following Friday’s 6-under par round was deemed non-conforming by the R&A, putting the No. 11 into scramble mode ahead of the year’s final major championship.

Schauffele said he had no issue with his driver being tested, but he also stated that he believed a random sample of 30 players wasn’t sufficient or fair.

“I had a little bit of a run-in with them because they only test 30 players. I thought it was a little bit unfair,” he said. “I would gladly give up my driver if it’s not conforming. But there’s still 130 other players in the field that potentially have a non-conforming driver, as well.”

Xander Schauffele became the first player to have his driver fail a COR (coefficient of restitution) test since the R&A began testing last year.

While he had no issue with his driver being tested, he did object to how the R&A only tests random samples. https://t.co/mboPQurrO2 pic.twitter.com/ADEsBkDlk7

In a statement, the R&A said the sample size was ample.

“We offer the testing as a service to players so that they can ensure that their drivers conform,” the R&A said in a statement. “We believe that 30 is a reasonable sample and a practical option for conducting this process in the week of a major championship.”

While Schauffele was the only pro to publicly disclose a failed test, Golf Digest’s Joel Beall reported on Saturday that he was not alone.

Update on the Xander/driver controversy. Multiple sources tell Golf Digest Schauffele may not have been the only player to fail the CT test, with 3-to-4 manufacturers at fault.

Asked about other failed tests, the R&A told us it wouldn’t comment further on the process. #TheOpen

“Multiple sources tell Golf Digest Schauffele may not have been the only player to fail the CT test, with 3-to-4 manufacturers at fault,” Beall tweeted. “Asked about other failed tests, the R&A told us it wouldn’t comment further on the process.”

Schauffele’s scramble to find a replacement driver was partially to blame for his opening-round 3-over par 74 that left him with work to do on Friday.

“(Thursday) it wasn’t really matching my bag, which was a bummer. I was getting a little upset on the golf course,” Schauffele said. “(Friday) I was testing a little bit on the range again with two different heads. But moved a few weights around and sort of found a good setting.”

That good setting increased his fairways hit from 6/14 on Thursday to 13/14 on Friday, and improved his score by nine strokes from 74 to 65.

Schauffele, who has finished inside the top-6 in four of his past six major championships, enters the weekend in a tie for 18th place at 3-under par, five shots back of 36-hole co-leaders Shane Lowry and J.B. Holmes.